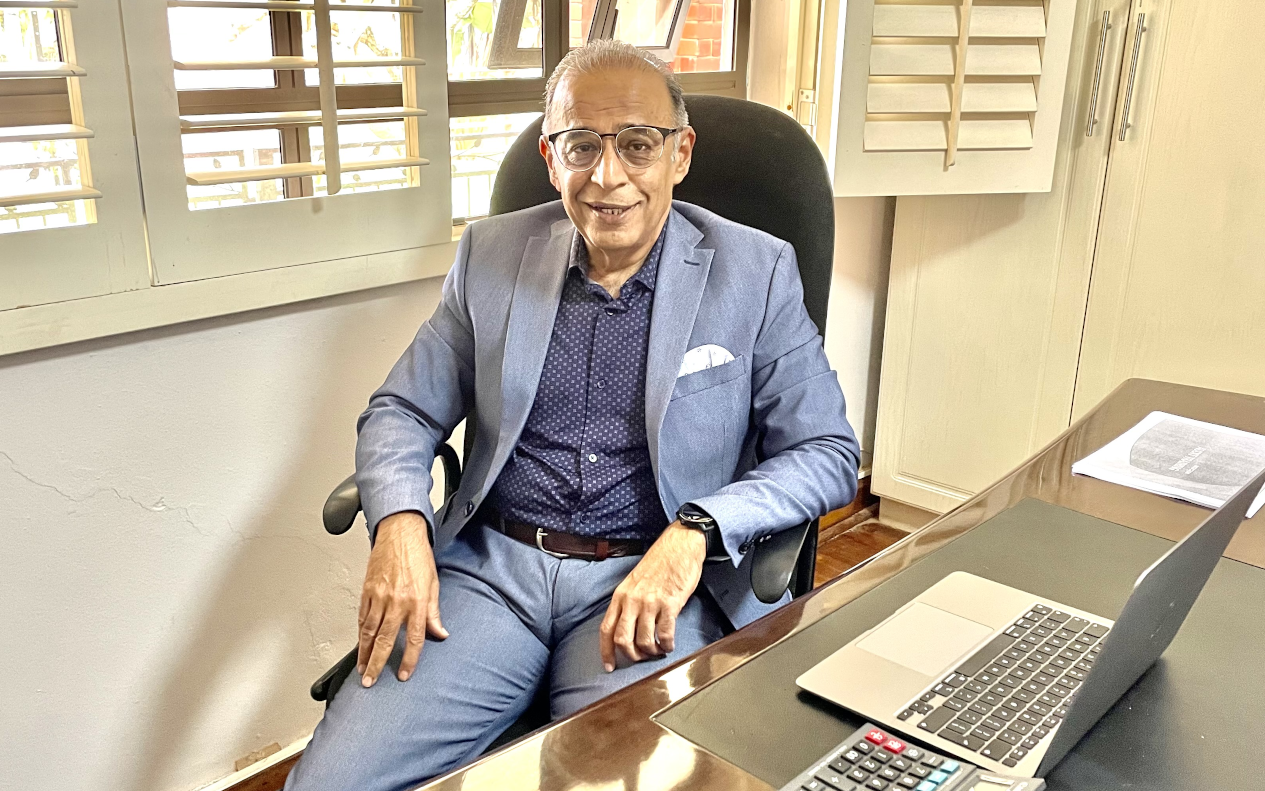 Chartered Accountant Mahomed Haffejee believes that each of us should have some accounting knowledge — after all, every individual has to take accountability for their salary. That’s why he’s an enthusiastic proponent of the South African Institute of Chartered Accountants Accounting Technician [AT(SA)] qualification.

Haffejee’s interest in accounting was sparked while at school. By the time he completed his studies at the University of Kwa-Zulu Natal (UKZN), he knew that he wanted to share his passion by lecturing students in the field.

After several years in academia, he decided it was time for a change. “I had too much energy!” he says. The best way to channel this energy, he resolved, was by setting up his own consultancy, 4th Dimension, focusing on the gap between university theory and practice.

It was while he was working to upskill graduates that Haffejee first came across the Association of Accounting Technicians (AAT) qualification. Already available overseas, the training had recently been introduced in South Africa. Thanks to his academic experience, Haffajee was immediately able to see its merit. 4th Dimension became one of the first service providers in the country to offer the qualification, and Haffejee has been a stalwart supporter ever since, joining SAICA’s (AT)SA Committee last year.

A boon for employers

Haffejee maintains that it was when AT(SA) was embraced by SAICA that the qualification was able to evolve to the next level, as this meant that it could be localised to suit the South African context. It also created exciting opportunities for upskilling. “We now have a qualification that had already been proven overseas, and which was now endorsed by the highest professional accounting and auditing body in the country,” he points out.

The reason for his enthusiasm is simple. Haffejee explains that the AT(SA) designation opens manifold options for people who typically may not consider pursuing a career as a Chartered Accountant. In fact, they may not even hold a formal qualification — and yet, they are already working in the accounting field as, say, debtors. Rather than remaining at this level, AT(SA) makes it possible for these people to develop their skills and take up more advanced posts.

Of course, when individuals gain more skills, employers benefit too, which is why Haffejee decided to target organisations when he first started promoting the qualification. “If we really want this training to gain traction, we need buy-in from everyone, but it is the employers who have to make the biggest changes — primarily because investing in staff can make an enormous difference to a company.”

He therefore set out to educate employers, drawing attention to the fact that, because the AT(SA) is essentially a learnership programme, employers are able to earn BEE points when their staff members take part. Moreover, because all companies operating within the accounting profession belong to the Finance, Accounting, Management Consulting and other Financial Services sector education and training authority (FASSET), and because this SETA recognizes the AT(SA), organisations are able to claim back a part of their training expenses through the SETA’s discretionary grant system.

Most employers become excited when they hear about these advantages, Haffejee says, although some still baulk at the amount of the initial outlay. But, when they come to realise that the AT(SA) helps their individual employees to move forward in their careers, their reluctance tends to dissipate. “They understand the value of having a pool of talent from which they can recruit people to vacant positions in the organisation, rather than having to source people externally.”

Educating employers about the qualification has certainly helped to bring more people on board, but Haffejee laments the fact that it still receives little exposure. This is a major hindrance in terms of takeup, he says. “In London, it’s commonplace to see adverts for the AAT in Tube stations. Here, awareness has been spread through word of mouth.”

Transformation imperatives have been a big help in encouraging takeup, he continues: BEE is obviously a major priority for organisations, and most organisations will happily take advantage of opportunities to score points.

Employers are also more open to learning more about the qualification when they learn that it is offered by SAICA; a body which has deservedly earned their trust, Haffejee adds.

He admits that, despite the inroads made in promoting the course, several barriers remain. One of these are the question marks that remain, largely because of that lack of exposure. “People might be excited about getting a chance to develop their skills, but they’re also not sure what they can do with this qualification once they have completed it. They don’t know how it can be used to further their careers,” he comments.

Mahomed also works to highlight the fact that the AT(SA) isn’t necessarily about ticking boxes from an academic point of view. Rather, it is a highly skills-based course — and, because of this, anyone who completes all three programmes will find themselves well equipped to take on new challenges in whichever field they choose.

The road to a more ethical society?

What, exactly, would a student learn during the AT(SA) programme? Mahomed explains that the first year is sufficiently accessible even for employees at fairly basic levels of an organisation. “You don’t need a Grade 12 certificate to complete it,” he says, “so long as you have grasped the fundamental principles of numeracy and literacy.” This level of the programme teaches students basic accounting skills, so even if they choose to opt out at this stage, they will be more marketable, and may be able to progress to a more advanced position in their company. “For example, a receptionist would now have the skills to take on the responsibilities of a debtor’s clerk.”

The second level of the programme builds on these learnings, and at the third level, students grapple with the concepts typically included in accounting qualifications, such as ethics, VAT for individuals and corporates, and income tax. Individuals who complete this level may call themselves “assistant accountants”, Haffejee says.

What excites him most about the qualification is how it can enrich not only the lives of individuals, who become more empowered by becoming more knowledgeable and skilled in practical matters that will help them manage their finances more effectively; it can also play a role in building accountability and integrity in the country — qualities which are sorely needed. “By concentrating on ethics, we are training people to embrace fairness, honesty and transparency. Even if they choose not to continue to study further in the field of accounting, they will bring this way of thinking to whatever they do, and, in so doing, will help South Africa to become a more ethical society.”