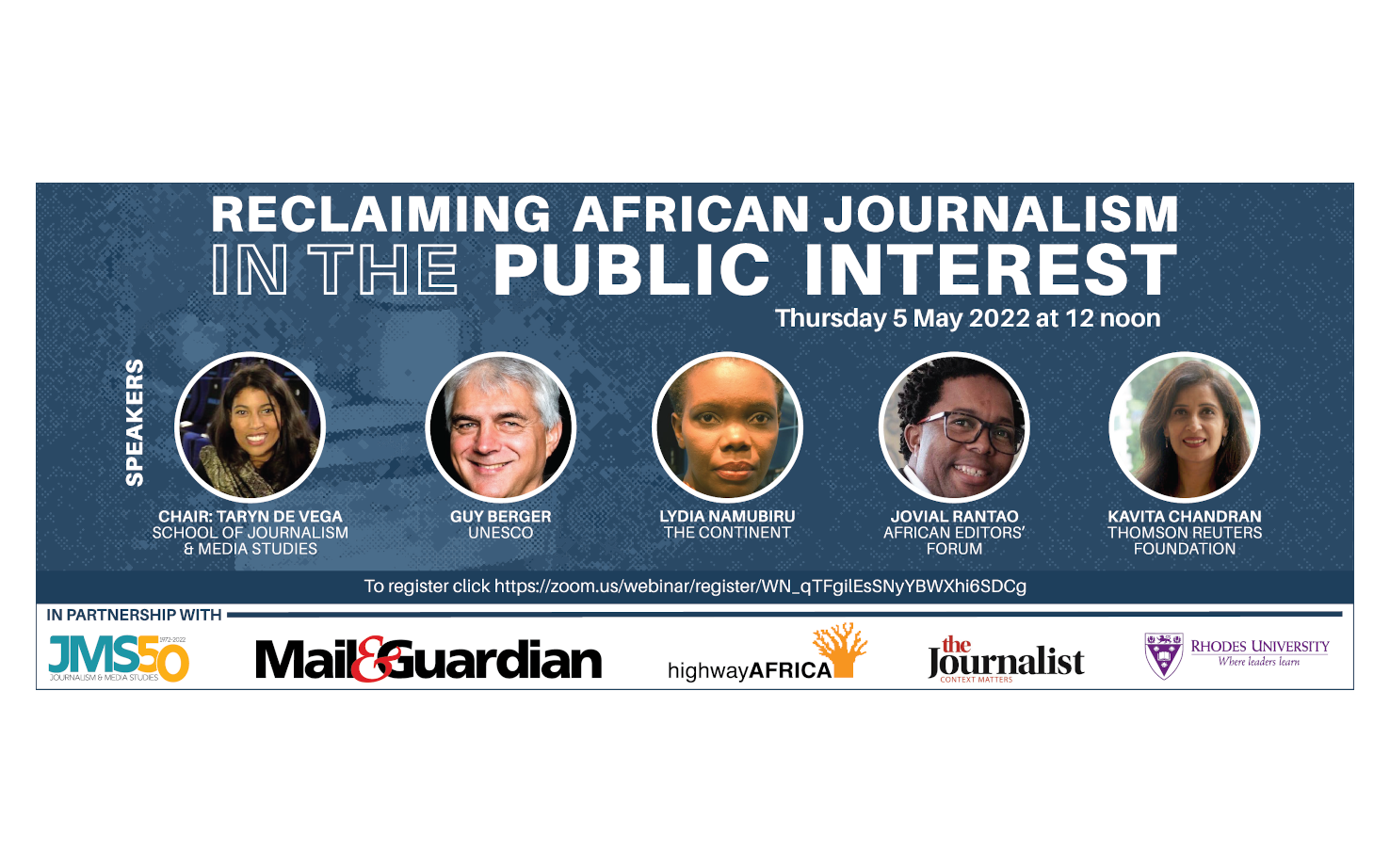 World Press Freedom Day 2022 (3 May) takes place at a time when the world is caught in an information war.

Not only does humanity teeter at the edge of a third world war, but it is also trapped in single stories about this conflict that are diametrically opposed to one another. The one story supports Ukraine and the Western World and the other Russia and its allies.

The truth lies somewhere in between. It is the role of journalism to provide all the information that can help the public formulate a considered view of the present conflict. Instead, one gets a very different view depending which news channel you tune into.

This unnecessary and tragic war started soon after the tapering of the Covid-19 pandemic. For two years, tragic news about Covid-19 deaths have hogged television screens and newspaper headlines. No sooner was this nearing an end when Russia attacked Ukraine and a fresh set of disturbing visuals and information were fed into already bludgeoned public minds.

Research is emerging that the coverage over the last few years has increasingly displayed negative news, indicating an erosion of public trust in both politicians and the news media. How politicians are going to navigate this challenge is up to them. The declining public trust in journalism however is something that journalists and the industry will have to interrogate and find a way forward to a healthier relationship with the public.

In May 2020, the Reuters Institute for the Study of Journalism at Oxford University examined the “infodemically vulnerable” in Britain, those who chose to reduce consumption of Covid-19 related news. Writing about this in the Athens Journal of Mass Media and Communications , Canadian academic Neill Fitzpatrick recorded that more than one-fifth of those surveyed said they often or always actively try to avoid the news, with the majority citing the impact on their mood.

“While not a new phenomenon, the scepticism surrounding journalism was exacerbated during the pandemic as anti-vaccination advocates and conspiracy theorists questioned the validity and accuracy of the Covid-19 facts shared by news organisations, even governments,” he said. “While mental health concerns appear to be the primary reason behind the increase in avoidance, growing distrust in mainstream media is also cited.”

In May 2021, a Google search for the term Covid-19 news yielded more than 25.2-billion results. Fitzpatrick quoted researchers who found that the majority of these stories share common factors such as negative headlines and grim statistics about Covid-19’s death toll, as well as its impact on families, businesses and healthcare workers. Taken together with the extensive coverage of Trump and Brexit in the Western World, it was enough for news consumers to tune out, he said.

By 2019, the Reuters Institute for the Study of Journalism‘s annual Digital News Report found 32% of those surveyed worldwide said they actively avoid the news, with avoidance highest in Croatia (56%), Turkey (55%), and Greece (54%). His paper does not factor in the war in Europe currently but cites research that the Trump, Brexit and Covid-19 news cycle left consumers feeling worse emotionally.

“It is clear both the consumers of news and those who produce it are frustrated with the current environment, but it is the journalists and news organisations that have the most to lose if nothing changes,” he said.

What is to be done?

Acutely aware of the challenges facing the profession, Rhodes Universities School of Journalism and Media Studies (JMS) has dedicated the month of May to interrogate the state of journalism in Africa. This is part of its year-long celebration of the 50th Anniversary of the school.

It will kick off the discussions on 5 May when the school in partnership with the multimedia website, The Journalist and the South African weekly newspaper, the Mail & Guardian will host a panel discussion entitled “Reclaiming African Journalism in the Public Interest”.

The world event will take place from 2 to 5 May, 2022 in Punta del Este, Uruguay. It will focus on the digital era’s impact on freedom of expression, the safety of journalists, access to information and privacy and will develop concrete recommendations to address these challenges.

According to the UNESCO website, World Press Freedom Day 2022 will reunite relevant stakeholders such as policymakers, journalists, media representatives, activists, cybersecurity managers and legal experts to explore these issues and develop concrete solutions to address the threats posed by increased surveillance to press freedom and privacy.

The JMS webinar will bring together sharp minds that will interrogate what could be done to meet the challenges of serving the public interest better on the African continent. The speakers will be Professor Guy Berger, UNESCO’s director of Freedom of Expression and media development, Jovial Rantao, current chairperson of The All Africa Editor’s Forum and editor of The African Mirror, Lydia Namubiro, news editor of The Continent, a special project of the Mail & Guardian and Kavita Chandran, Singapore-based journalist and media trainer. Facilitating the discussion will be JMS’s Taryn Isaacs De Vega. Lydia Namubiro is based in Ghana, Guy Berger in Paris, Jovial Rantao in Johannesburg and Kavita Chandran in Singapore. Kavita Chandran serves on the faculty for Journalism and Communications at Murdoch University, Kaplan Institute, and SP Jain Global School of Management. She will introduce her work as a trainer of solutions journalism as a catalyst for change in the media.

“I am an accredited trainer with the Solutions Journalism Network that has worked with more than 500 news organizations and 20 000 journalists since 2013 to integrate a solutions-based approach in their reporting,” said Chandran.

“Our research shows that audiences across demographics find solutions to stories more interesting, trustworthy, and informative. There is news fatigue that has set in for readers because of the constant flow of negative information, and solutions journalism aims to correct that by holding problem-solvers accountable for their promises. Instead of harping on about the same problem in every story, I train journalists to investigate solutions, and give readers hope instead of a sense of helplessness.”

This approach is not new to South African journalism

Many years ago in the 1970s a small group of South African journalists changed the way in which they were reporting stories to show the public what was possible. The Union of Black Journalists, which became the Writers’ Association of South Africa (WASA) after UBJ was banned, started a community newspaper called Grassroots which set out to share news about what communities were doing to solve their problems. The idea was to find stories which demonstrated what people were doing in one community so that other communities could be inspired and consider doing the same.

These local papers were replicated across the country in the 1980s. They included The Eye in Pretoria, Ukusa in Durban and Saamstaan in Oudtshoorn. This led to many young people stepping forward to unite and solve problems that were facing their local communities.

Unfortunately, this approach was largely not carried into post-apartheid South Africa. With communities in South Africa and across the world facing serious challenges, there can be no better time for journalists to step up to the plate as they have always done across the world to contribute to finding ways forward to easing bludgeoned minds.

Through a series of discussions spread throughout the year, the JMS school will consider ways in which journalists can define what must be done to restore the public trust and in so doing contribute to mending the torn social fabric on display worldwide.

“We are reaching out to as many partners as possible to celebrate the anniversary of the school but also to use this time to seriously examine how journalism should not only focus on corruption and social failure but find a way to tell a fuller story of life as it unfolds in both negative and positive ways,” said De Vega.

One is the presentation of Dr Imtiaz Suliman, the founder of the Gift of the Givers, introduced by the South African Broadcasting Corporation’s Leanne Manas. This story provides material that can be written into an illustration of Solutions Journalism.

The other is a story on the news site GroundUp that describes a community’s intervention in the plight of the homeless in their area.

— Zubeida Jaffer, journalist, author and activist, serves on the 50th Anniversary Committee of the JMS School