Ukrainian President Volodymyr Zelenskyy has accused Russian forces of attacking childcare centres and other civilian infrastructure during their invasion of Ukraine.

In an address aimed at the people of Russia earlier today, Mr Zelenskyy said such targets have been shelled by invading forces.

“There is nothing that could possibly explain why the kindergartens and civilian infrastructure are being shelled,” Mr Zelenskyy said.

“What kind of war is this against the Ukrainian children? Who are they? Are they also neo-Nazis? Or are they NATO soldiers that imposed a threat to Russia?”

Vladimir Putin has frequently made the baseless and untrue assertion that the Ukrainian Government is a Nazi regime, claiming “denazification” as a justification for launching the invasion on Thursday.

Mr Zelenskyy also warned tonight would be the “hardest” for Ukraine, warning Russia would use “all available means to break our resistance. This night they will launch an assault”.

“This night will be harder than the day. Many cities of our state are under attack: Chernihiv, Sumy, Kharkiv, our boys and girls in the Donbas, the cities of the south, special attention to Kyiv,” he said.

“We can’t lose the capital.”

“Our main goal is to finish this slaughter. The enemy losses are very grave — today there were hundreds of killed soldiers who crossed our border and came on our land,” he said.

He also reiterated a plea for faster international aid and for Western nations to do more to stop Russia, including cutting it off from banking network SWIFT.

“Europe has enough strength to stop this aggression,” he said. 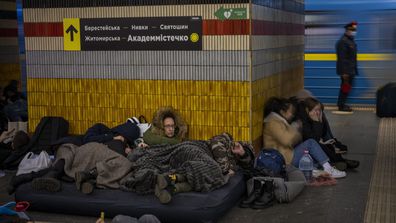