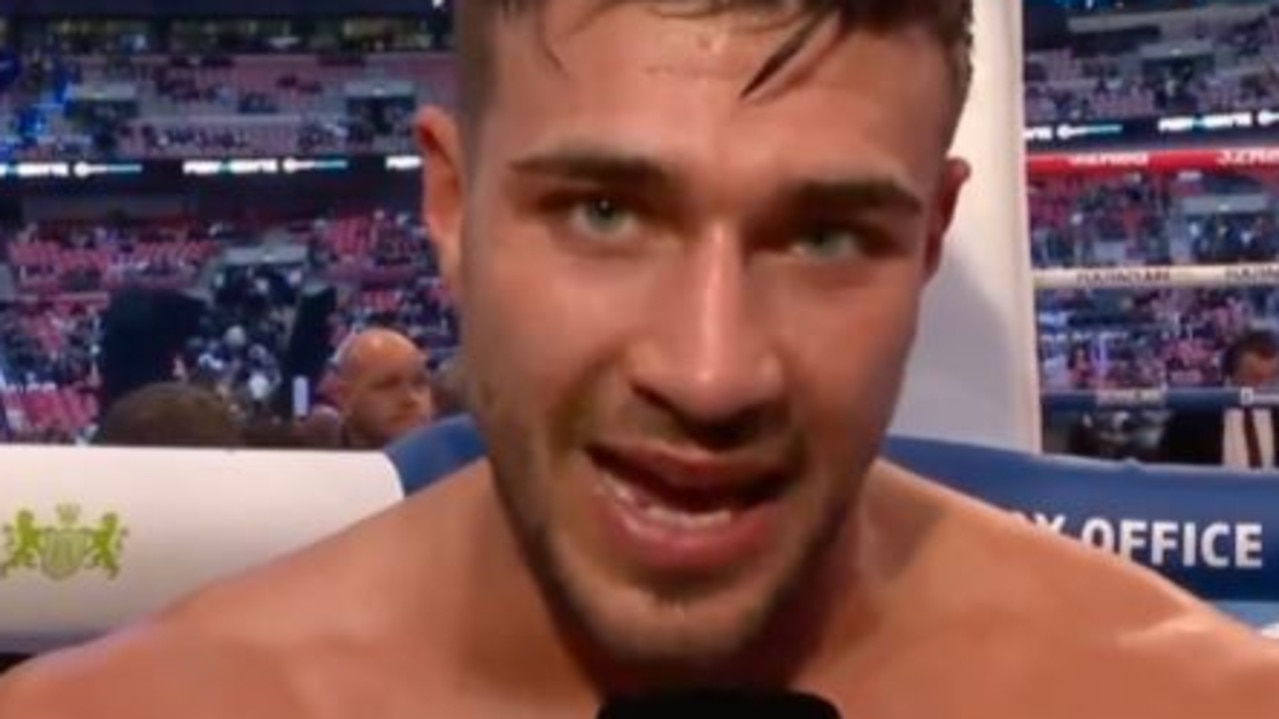 Tyson Fury’s younger brother was robbed of his big moment when technical difficulties ruined his call-out of YouTuber Jake Paul.

The self-styled “Gypsy King” will fight on UK soil for the first time since August 2018, with an expected crowd of 94,000 due to set a post-war British record boxing attendance.

The younger brother of Tyson Fury secured a fifth round win with a knockdown to extend his professional record to 8-0.

But as he gave his post-fight interview, the sound cut off for a few seconds, ruining his big moment.

The cut happened as Fury was passionately calling out YouTube star-turned-boxer Jake Paul.

“Jake Paul, this should have been done a long time ago,” Fury said. “If you want it I am here and ready for you. I will cut you and chop you to bits, just like I did there.

“Just get the contracts signed, you bum, let’s get it done once and for all.”

Ariel Helwani reports Paul wasn’t impressed with what he saw.

“Congrats on beating a 10-1 fighter. But that stadium was empty,” Paul said. “When I fight the stadium is full. When Tommy fights no one gives a f*** — and that’s in his home country.”

Fury says his fight against Whyte will be his last before he hangs up his gloves after a colourful career in and out of the ring.

If he does follow through with his plan to quit, he would spurn the chance to face either Oleksandr Usyk — the current WBA, IBF and WBO champion — or another domestic rival in Anthony Joshua.

Fury held all three of those belts after he beat Wladimir Klitschko in 2015. He weighed in 5kg heavier than Whyte on Saturday. At 120kg, Fury is more than 5kg than the career-high 125kg he registered before knocking out Deontay Wilder in Las Vegas in October.

Fury is odds-on favourite to win at Wembley but insisted he was not “untouchable” as he prepares to shake off a fight week free of animosity and go to “war”.

The British boxer was knocked down four times in his trilogy against Wilder and also had to rise from the canvas to beat Neven Pajkic in 2011 and Steve Cunningham two years later.

“I’m not sure about all this outboxing — unless I’m Houdini, I can definitely hit them all, for sure, but I’ve definitely been hit before,” said Fury, who has won 31 and drawn one of his 32 fights.

“I’ve been bounced off the canvas more times than a bouncy ball. I’m not this untouchable boxer everyone thinks I might be. I’m just a normal boxing man who has got lucky 32 times in a row, I think.”

Fury and Whyte were training partners on several occasions earlier in their careers. The pair have been critical towards each other on social media for years but fight week has been remarkably cordial and restrained, and the bonhomie continued at the weigh-in.

“(Whyte is) a decent bloke,” said Fury. “He’s got some morals and we got along like a house on fire in training camps.

“He’s definitely a fearless guy, I’ve sparred him a lot in the past and he didn’t show any weaknesses at all. I’m not going to sit here and slate the fella because I’ve not got anything to slate him on.”

Fury, 33, and Whyte, 34, were in playful spirits at the final stare down. The 206cm tall Fury emphasised his 13 cm height advantage by standing on his tiptoes and Whyte played along by crouching down, with the pair shaking hands, trading baseball caps and sharing wide grins.

They briefly danced on stage alongside one another but Fury was clear the mood would be different when they next meet.

“We’re going to give you a real fight,” he said. “Don’t doubt us, we’re going to put a show on like no other before. It’s going to be a war, don’t worry about that.”

Mandatory challenger Whyte, who was born in Jamaica, has waited years for his world title shot.

“Nothing is worth this wait, but we are here,” he said. “I’m not someone who really complains or cries about things, but I should have had my title shot at least two years ago.

“I’m two years more seasoned, I have been through ups and down in those two years, so I am more mature as a person and a fighter.”