Scientists have uncovered what they believe is the first fossil linked to the catastrophic asteroid event that wiped out the dinosaurs.

They have described the dinosaur leg as “stunningly preserved” and it even has skin still attached to it.

The leg is among a group of remains that were found at the Tanis fossil site in North Dakota, in the US, and offers more insight into what happened when the dinosaur’s reign ended 66 million years ago.

The BBC reports very few dinosaur remains have been found in rocks that record even the final few thousand years before they were wiped out so these Tanis finds are something very special.

The BBC has spent the past three years filming at the Tanis site for a project with documentarian Sir David Attenborough.

Many of the specimens will be shown for the first time and among the other examples of well-preserved creatures from the moment the asteroid struck include a fish that breathed in impact debris, a turtle that was skewered by a wooden stake, skin from a horned triceratops and the embryo of a flying pterosaur still inside its egg.

While the main impact site of the 12km-wide asteroid is believed to located in the Gulf of Mexico, the Tanis site in North Dakota is roughly 3000 kilometres away – but why the remains are so well-preserved is a mystery.

The BBC believes the remains of animals and plants at Tanis seem to have been rolled together into a sediment dump from waves of river water set off by intense earth tremors – with ocean organisms mixed in with the land-based creatures.

The scientists also believe they have sourced a fragment of the asteroid itself.

This is because sturgeon found at the Tanis site had breathed in spherules of molten rock emitted in the impact.

When scientists examined these spherules in the sturgeon gills, they found they were linked to the Mexico impact site and two examples that were encased in tree resin had tiny inclusions of extra-terrestrial origin. 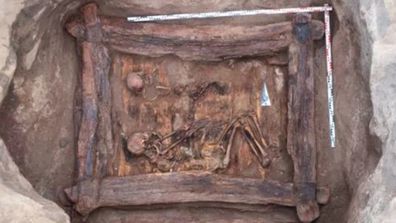 Ancient burial mound found in Siberia’s ‘Valley of the Kings’

“We were able to pull apart the chemistry and identify the composition of that material,” the University of Manchester’s Professor Phil Manning told the BBC.

“All the evidence, all of the chemical data, from that study suggests strongly that we’re looking at a piece of the impactor; of the asteroid that ended it for the dinosaurs.”