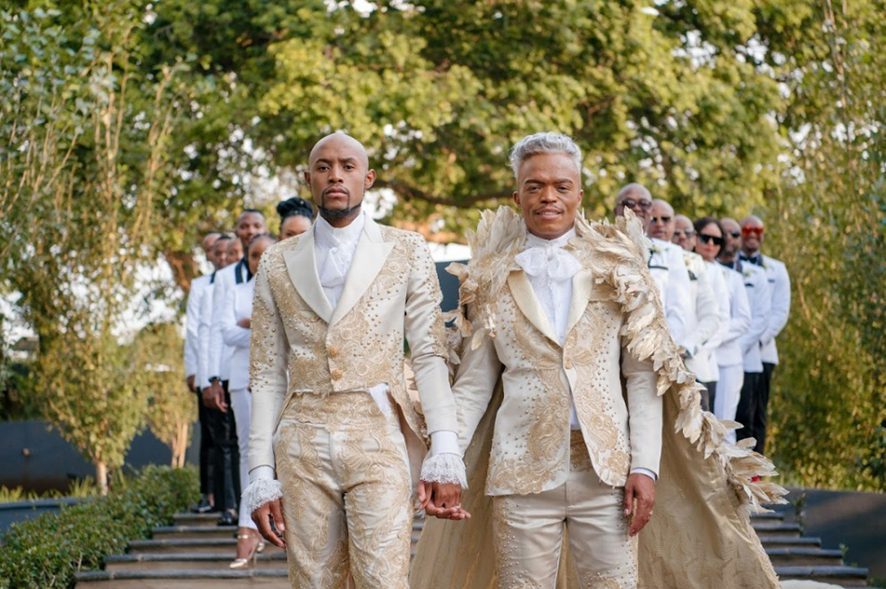 Controversial television and radio personality Somizi Mhlongo and his estranged husband Mohale Motaung have temporarily declared a ceasefire and joined forces to fight their television show producer for failing to pay them R1.5-million for the broadcasting rights to their wedding ceremony.

Mhlongo and Mohale walked down the aisle in a two-legged wedding shindig of cosmic proportions in Joburg in 2020.

But they separated last year after accusations and counter accusations of domestic violence, and are heading for an acrimonious divorce after Mhlongo filed divorce papers in the Joburg High Court last year.

Before their wedding, the two sold their broadcasting rights to Bar Leader TV, which produced their show Living The Dream With Somizi, which was flighted on DStv’s Mzansi Magic channel. But the company, which is owned by businessman Legend Manqele, has failed to pay them two years after the wedding day was broadcast on DStv’s streaming platform Showmax.

The two seem to have agreed to an armistice so they can collectively fight Manqele for failing to pay them.

Their war against Manqele and his company came to the fore after Mohale’s lawyer, Vanessa Da Silva Farai Fernihough, of Ulrich Roux and Associates, wrote a letter of demand on Thursday to the producer to pay the money by no later than Thursday next week or face a lawsuit.

According to the letter, which we have seen, Mhlongo and Mohale, who were represented by their company, Elahom Events, signed an agreement with Manqele’s company to film and broadcast their wedding for a whopping R1.5-million fee.

The lawyer said they wrote a letter to Manqele in July last year pleading with him to pay their clients, but he told them that he was waiting for some documents from the South African Revenue Service, and documentation from his team before he could respond to their letter.

“To date, no response or documentation has been received from either you or any other representative of Bar Leader TV.

“The written agreement entered into between our client, Elahom Events Group , as the representative of Mr Motaung and Mr Mhlongo, and Bar Leader, provided that Elahom was due to receive an amount of R1.5-million as remuneration for the services rendered by the ‘talent’,” reads the letter.

She said instead of remitting payment, Manqele also asked Mhlongo and Motaung to complete and submit time sheets before he could process the payment. But he failed to do so after they completed and submitted the documents.

The lawyer said Manqele had also delayed the payment when he requested documentary evidence to prove that Mhlongo had consented to the funds being paid into their trust account.

They stated that Mhlongo had indeed consented to the payment of the funds into their trust account and even attached a letter from the Idols SA judge as evidence that he had consented.

In the letter, which the newspaper has seen, Mhlongo stated that Manqele should pay the money into the account of Mohale’s lawyers and it should remain there until their dispute was resolved.

The lawyers have instructed Manqele to pay the money and threatened to take legal action against him and possibly liquidate his company to recover the money if he failed to do so.

Mohale pleaded ignorance when we contacted for comment. It’s not true,” he said.

Manqele said he received instruction from SARS not to pay Somizi. “Somizi must take it up with SARS,” he said.