“As a journalist, you always do detach yourself a bit [from the story] because you have to write stories,” he explains.

“[But] when I was waiting at Buckingham Palace for the hearse to return with her inside it for the last time, you start mentally going through what you’re going to say, ’cause you only get one shot for the piece to camera and I started thinking ‘I want to mention that Buckingham Palace is home’.

“I’m familiar with seeing the Queen but seeing her today like this, it’s been a week since she died, and it’s still something of a shock,” he tells 9News.com.au.

“I can see now why people say it’s surprising how much it hits you when you see her coffin there in front of you and think, ‘wow, she really is gone’.

“Intellectually you can know that, but to see the coffin, that makes a big difference.”

The esteemed reporter has been in war zones and covered some of the most critical stories of our time,﻿ but expects this will be “the biggest single event” of his career.

“Walking past outside Buckingham Palace, there’s this massive media centre set up from all the main news organisations and a lot of smaller ones from around the world. I’ve never seen anything of that magnitude,” McLeod tells 9News.com.au.

“And that’s just one location. There’s many others around London too. So, that made me think ‘no, this is big’ because of the duration of it, the scale of it, the sense of history.”

Another big occasion McLeod had covered recently was the Queen’s Jubilee, marking her 70 years on the throne﻿.

However, the journalist says he got a sense of finality during the four-day weekend in London.

“I remember thinking at the time, ‘this feels like the last time we’ll see her’, certainly before crowds of that scale,” he says.

McLeod remembers when Her Majesty walked out onto the balcony at Trooping the Colour “cheers just filled out at the front of Buckingham Palace”.

“That was a real moment,” he recalls.

“That was one of those pinch-yourself moments where you think ‘I’m glad I’m here because I don’t know if I’ll see her again’.

“And the same again on the last day, that was a bit more of a surprise when she walked out on the balcony again. I thought ‘I don’t see her ever doing that again’.”

As the 59-year-old ﻿reminisced about royal stories covered over his decades in the business – which includes three stints in London as a correspondent – McLeod said a couple of instances made him smile, including the time he accidentally “broke royal protocol”.

During an annual Barnardo’s garden party at Buckingham Palace ﻿back in 2003, the TV reporter turned to face the camera as the Queen walked behind him to “get the shot” for his news package.

“Straight after that a steward comes over to me, put his hand on my shoulder and said, ‘You are not to turn your back on Her Majesty!’

He also fondly recalled the late monarch’s last trip to Melbourne, with the royals seeming more relaxed in Australia.

“I got the impression she enjoyed Australia because in London, in the UK, she was a fixture and if you travelled somewhere, it wouldn’t necessarily get as much attention. If she went anywhere in Australia, she got a lot of attention.

“She had been there to Australia a lot of times and she was familiar, but still got adoring crowds.”

One such occasion was when Her Majesty and Prince Philip got to take a special trip through Melbourne, back in 2011.

“They put on a tram for her from Flinders Street Station just to drive, really, one stop,” he recalls.

“So that was sweet because there’s some lovely pictures of the Queen in a very bright outfit, stepping off the tram before she gets into a car to go and meet the governor of Victoria.

“And the tram driver was very sweet because she was, of course, quite nervous about driving the royal couple. She said that when they got on board, and she explained to them that she was going to take them on this trip that was from here to there and was very happy to have them on board, Philip said, ‘Well, that’s great, we better get a move on then’ and hurried her along,” he laughed.

After covering a number of royal stories both big and small, fun and serious, across his career, ﻿McLeod says reporting on Queen Elizabeth’s death and funeral is a once-in-a-lifetime event. 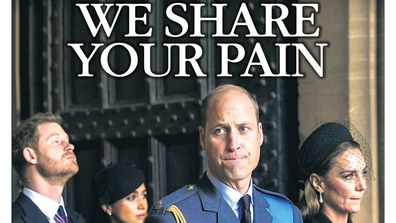 News outlets around the world show outpouring of grief

“We won’t ever see a royal story this big again. And I don’t know if we will see much else that can compete in terms of this big-occasion sort of story again.”