The code phrase for when the Queen dies is “London Bridge is down”, which is relayed to the British prime minister and government officials.

Following this message being made public, just how does the United Kingdom, and the Commonwealth, then commemorate such a significant event?

Britain and the Commonwealth will get a new King – Prince Charles will become the new monarch.

Like his late beloved mother Queen Elizabeth II, he chose to keep his Christian name, and he became King Charles III.

The news of the Queen’s death was announced by Buckingham Palace, and delivered by a newsflash by the Press Association in the UK, which went out to the rest of the world simultaneously.

The Union flag on top of Buckingham Palace was lowered to half-mast at 18:30 BST (03:30 AEST) and an official notice announcing her death was posted outside.

Crowds who had gathered outside the palace wept.﻿

Britain’s commercial radio stations then received a notification via blue flashing “obit light”, which means presenters need to switch to the news and play inoffensive music from prepared playlists. 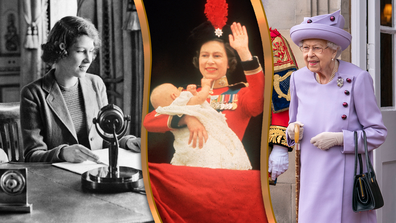 The Queen’s life in pictures

Newsreaders will wear black suits and black ties, and normal programming will stop.

In Australia, flags will fly at half-mast for the next 10 days except when the accession of the new monarch is proclaimed.

There will be gun salutes across the country, and the High Commissioner to the UK will participate in events.

There are 10 official days between her death and when Her Majesty is laid to rest, with ceremonial events to take place throughout the period.

Here’s how the Queen’s life will be officially commemorated.

D-Day is the day of Queen Elizabeth II’s death.

Today, her passing was announced by Buckingham Palace. The Royal Family website was replaced with a simple message confirming her death.

A traditional announcement was placed on the gates of Buckingham Palace as the country goes into a state of mourning and flags have been lowered to half-mast.

The King, the Queen’s eldest son Charles, issued an official statement with Buckingham Palace letterhead 30 minutes after the palace announced his mother’s death.

The statement “from His Majesty the King” said: “We mourn profoundly the passing of a cherished sovereign and a much-loved mother. I know her loss will be deeply felt throughout the country, the realms and the Commonwealth, and by countless people around the world.”

A public service will be held at St Paul’s Cathedral in the evening. No members of the royal family will attend.

The King will be visited by the Prime Minister at some stage today.

This operation contains plans for if the Queen died in Scotland.

According to a leaked version of the plan, it is likely her coffin will temporarily rest at the Palace of Holyroodhouse.

Her coffin will be taken there by road two days after her death, before being taken to London and the palace, either by The British Royal Train or plane.

In line with royal tradition, D-Day is proceeded with 11 days of ceremony.

These days are officially referred to as D-Day, D+1 and so on.

D+1: Proclamation of the King

This day is known as The Proclamation of the King.

The Accession Council – a group formed of all Privy Counsellors, Great Officers of the State, the Lord Mayor and City Civic party, Realm High Commissioners and certain senior civil servants in the event of a new Sovereign succeeding to the throne – will meet for two events at St James’s Palace.

Australia’s High Commissioner to the United Kingdom will be among those who attends the first event.

The King will join the second event.

At 11am (local time), flags will return to full-mast and Charles will be proclaimed King by the Garter King of Arms.

The new King is expected to move from St James’s Palace to Buckingham Palace and here he will meet the public and view the flowers and tributes placed outside.

Today, it is expected countries across the Commonwealth, including Australia, will hold proclamation services. Members of the public are invited to sign condolence books which will be opened in public spaces and buildings from today.

Flags will today return to half-mast out of respect for the Queen’s passing.

The King will meet with the Secretary-General of the Commonwealth and the Dean of Windsor.

D+3: The King begins his tour

The King’s official duties begin today, when he starts his tour of the United Kingdom. This is an opportunity for him to meet with as many members of the public as possible across the country.

He will first visit Edinburgh in Scotland and will go to the Palace of Holyrood House for a guard of honour inspection.

The King will then attend a remembrance service at St Giles’ Cathedral and meet with the First Minister.

The King will make his way to Belfast, in Northern Ireland, today.

He will visit Hillsborough Castle, and then attend a remembrance service at St Anne’s Cathedral.

Following this, the King will return to London.

Today is a significant day for the mourning period.

The day begins with the Imperial State Crown, orb and sceptre and flowers being placed on the Queen’s coffin. The royal family will hold prayers.

At 2.30pm (local time) a gun carriage procession will take the coffin from Buckingham Palace to Westminster Hall at the Palace of Westminster.

Here, it is expected members of the family and palace staff will walk on foot behind the procession, which will travel past the Queen Victoria Memorial and on to Pall Mall, through the Horse Guards Parade, Whitehall, Parliament Square and into New Palace Yard.

At 3pm (local time), the coffin will arrive at Westminster Hall and be moved inside. A short service will be held by the Archbishop of Canterbury with the royal family in attendance, before they return to Buckingham Palace.

From here, the lying in state begins. It will continue for five days, with hundreds of thousands of people expected to visit the Queen at Westminster Hall.

No public events are to take place on this day and the King will not be seen in public.

The King will go to Cardiff, Wales today, to attend a remembrance service at Llandaff Cathedral, visit the Senedd and then have an audience with the First Minister at Cardiff Castle.

Members of the public will be invited to attend a reception at the castle.

From here, the King will return to London in the afternoon, meeting faith leaders at Buckingham Palace.

A vigil will be held at Westminster Hall in the evening, attended by members of the royal family.

World leaders, dignitaries and officials are expected to begin arriving from around the globe today.

The King will meet with Governors General and Prime Minister from the Commonwealth realms at Buckingham Palace.

With one day to go until the Queen’s funeral, the royal family will be briefed on funeral arrangements.

Today is the day when the United Kingdom and the world says farewell to Queen Elizabeth II.

It is an historical and momentous moment that will be remembered throughout history.

The lying in state ends at 8.30am (local time). Two hours later, the Queen’s coffin will be moved from Westminster Hall to Westminster Abbey.

From here, a gun carriage procession will take the coffin back past Buckingham Palace, arriving at Hyde Park Corner at 1pm.

The coffin will then be moved on to a hearse and begin its journey by road to Windsor Castle, where a committal service will be held at St George’s Chapel at 4pm.

At the end of this service, the coffin will be lowered into the Royal Vault. A private burial will be held with the King and other members of the royal family that evening and the Queen will be laid to rest.

Flags across the country will be returned to full-mast today, and the national mourning period will begin.

The time will be determined by the British Government. 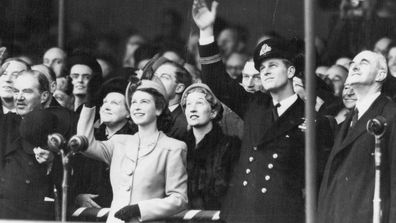 King Charles’ official coronation is likely to take place up to a year after the Queen’s funeral. This will be a public holiday in the UK.

This will also happen for passports, stamps and official uniforms. The British national anthem will be changed to “God Save the King”.