If you love space and exploring the cosmos, there is no shortage of wonder right now.

Scientists identified mysterious diamonds that likely originated from a dwarf planet that once existed in our solar system – until it collided with a large asteroid 4.5 billion years ago.

The rare space diamonds aren’t the only find mesmerizing researchers.

A “breathtaking” image captured by the James Webb Space Telescope is revealing the secrets of star birth in the Orion Nebula.

Meanwhile, the Artemis I mission has a new launch date scheduled for September 27, with a 70-minute window that opens at 1.30am.

And on Mars, inspiring discoveries are afoot as the Perseverance rover investigates an intriguing site.

The Perseverance rover has made its most exciting find on the red planet to date.

Perseverance has finally collected samples from the site of an ancient river delta, which is full of rock layers that serve as a geological record of the Martian past.

Some of the rocks include the highest concentration of organic matter found by the rover to date, according to NASA scientists.

Among the organic matter are minerals that correlate with sulfates, which could preserve evidence of once potentially habitable sites on Mars and the microbial life that may have existed there.

These important samples could answer the ultimate cosmic question: Are we alone in the universe?

Modern humans and Neanderthals lived in tandem until our ancient relatives went extinct about 40,000 years ago.

Now, researchers think they may have pinpointed something that gave Homo sapiens a cognitive edge over the Stone Age hominins.

Scientists discovered a genetic mutation that may have allowed neurons to form faster in the modern human brain.

“We’ve identified a gene that contributes to making us human,” said study author Wieland Huttner, professor and director emeritus at the Max Planck Institute of Molecular Cell Biology and Genetics in Dresden, Germany.

But some experts think more research is needed to ascertain the gene’s true impact.

Three teams of scientists won the 2022 Golden Goose Awards, prizes organised by the American Association for the Advancement of Science, for pioneering breakthroughs.

One of those includes the Foldscope, a microscope made from paper that costs $1.75 to make.

Stanford University bioengineer Manu Prakash came up with the idea on a research trip in the Thai jungle more than a decade ago.

The scientific instrument has traveled around the world, and researchers have even used it to identify a new type of cyanobacteria.

Mark your calendars: A NASA spacecraft will intentionally crash into a tiny asteroid on September 26.

The Double Asteroid Redirection Test spacecraft, or DART, launched in November and is on its way to a rendezvous with Dimorphos, a small moon orbiting an asteroid called Didymos.

The mission will nudge the asteroid, which poses no threat to Earth, to change its speed and path in a first-of-its-kind test of kinetic impact.

If DART is successful, the mission could demonstrate future ways to protect Earth from space debris.

The spacecraft recently got its first glimpse of Didymos from about 32.2 million kilometres away.

On the day of the encounter, we’ll see Dimorphos for the first time before DART collides with the space rock.

The Xerces blue butterfly, Floreana giant tortoise and Tasmanian tiger are just some of the species that the world has lost due to human-driven threats. 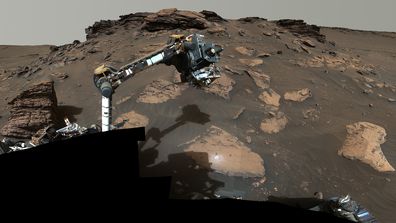 Schlossman provides a glimmer of hope at a time when biodiversity loss is accelerating. Of the 82 species photographed for the book, 23 are extinct, he said.

Thanks to conservation efforts, the rest have been brought back from the brink of disappearing or, as in the case of the New Zealand kākāpo, can recover with “robust” conservation work.