Adviser Myhailo Podolyak told The Associated Press that Ukrainian authorities did not know the current condition of the facilities at Chernobyl, the site of the world’s worst nuclear disaster.

“After the absolutely senseless attack of the Russians in this direction, it is impossible to say that the Chernobyl nuclear power plant is safe,” he said.

The State Agency of Ukraine on Exclusion Zone Management spokesperson, Yevgeniya Kuznetsovа, told CNN there was no one there to defend the facility.

“When I came to the office today in the morning [in Kyiv], it turned out, that the [Chernobyl nuclear power plant] management had left. So there was no one to give instructions or defend,” she said.

A nuclear reactor at the plant 130 kilometres north of Ukraine’s capital, Kyiv, exploded in April 1986, spewing radioactive waste across Europe.

The exploded reactor was covered by a protective shelter several years ago to prevent radiation leaks.

A Ukrainian official said Russian shelling hit a radioactive waste repository and an increase in radiation levels was reported.

The official spoke on condition of anonymity to discuss the sensitive matter.

Other governments did not immediately corroborate or confirm the claims.

Russia previously said only that it unleashed air and missile strikes on Ukrainian air bases, air defence batteries and other military facilities.

The ministry said it has destroyed 83 Ukrainian military facilities. 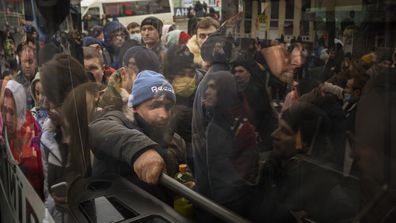 For the first time since the start of the action, Defence Ministry spokesman Igor Konashenkov confirmed the Russian ground troops had rolled into Ukraine, saying they advanced toward the city of Kherson, northwest of Crimea.