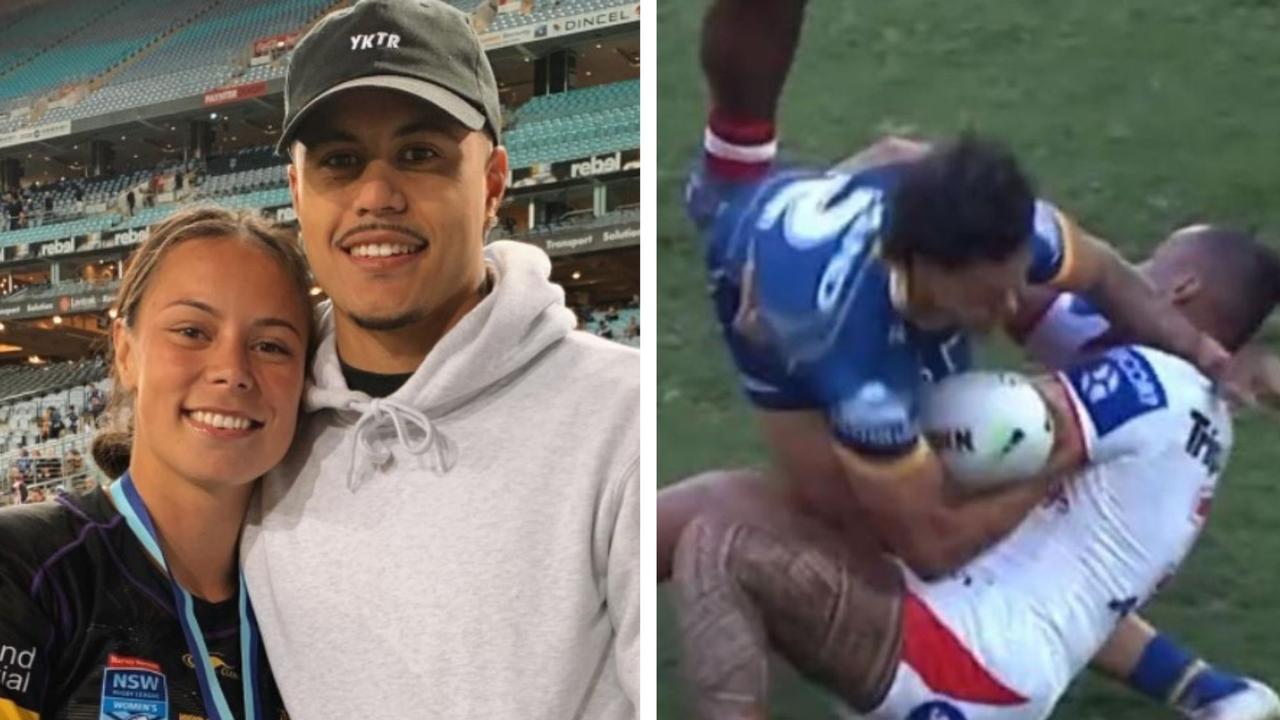 An ugly tackle in the trial match between the Eels and Dragons has cost one player an entire season and made Sunday lunch super awkward.

Parramatta Eels winger Haze Dunster is set to miss the entire NRL season after a catastrophic knee injury saw his anterior, medial and posterior ligaments all ruptured in his knee.

In the 13th minute of the trial match against the Dragons, Tyrell Fuimaono performed a hip drop tackle, twisting Dunster’s leg as he fell in an ugly way to start the season.

Stream every game of every round of the 2022 NRL Telstra Premiership Season Live & Ad-Break Free In Play on Kayo. New to Kayo? Try 14-days free now.

The Eels revealed Dunster will require surgery in the coming days before beginning the rehab process.

Fuimaono, who was sin binned for the tackle, will face the judiciary with a five week ban hanging over his head if he takes the early plea, while he could face seven weeks if he fights it and loses.

It was a disastrous first hit out for both sides due to the ugly moment but it could also make things awkward in their personal lives.

The Daily Telegraph revealed that Dunster and his girlfriend, Dragons NRLW signee and Tyrell’s sister Taliah Fuimaono were spotted eating lunch together just before it was revealed Dunster would be out for the season.

Dunster, who signed on for the Eels until the end of the 2025 season, has been dating Taliah since April 2015.

Taliah is a five-eighth who will become the first brother-sister combo to play for the same first grade club at the same time when she is expected to debut in the NRLW this weekend.

Dunster took to social media after the news broke about his injury, writing: “Uhh there it is! Really appreciate all the support and messages. Shattered that 22 started off like this but it is what it is. Time to take on this new obstacle and be back ready for 23.”

But Tyrell’s tackle has sparked plenty of outrage already.

The Daily Telegraph’s Paul Crawley wrote that he was “sick of seeing innocent players taken out of the game by illegal and dangerous play”.

“Regardless of what the damage ends up being, there is no excusing the tackle that caused the injury by St George Illawarra’s Tyrell Fuimaono,” he wrote.

“No, Dunster’s name doesn’t carry the same weight as a Nathan Cleary or Tom Trbojevic.

“But how would we be reacting right now if it was Cleary or Turbo’s season in jeopardy because of a similar unnecessary and ugly incident that left Dunster in awful pain and unable to walk unassisted from the field?”

Fox League’s Braith Anasta said Fuimaono had a troubling record, having been banned for five-weeks last year for a tackle which saw Melbourne’s Ryan Papenhuyzen knocked out during Magic Round.

“I actually don’t think that was intentional,” Anasta said.

“I don’t think it was a stereotypical hip-drop (tackle), I don’t think he meant it, he was just trying to get him to the ground.

Similarly, Panthers legend Greg Alexander said: “He did throw himself at the legs, (but) Dunster, the way he ran, he almost dragged Fuimaono around with him. He hit and spun. Technically, it was a hip-drop (tackle), but I think there are mitigating circumstances there for Tyrell Fuimaono.”

Originally published as Haze Dunster out for the season, dating Tyrell Fuimaono’s sister