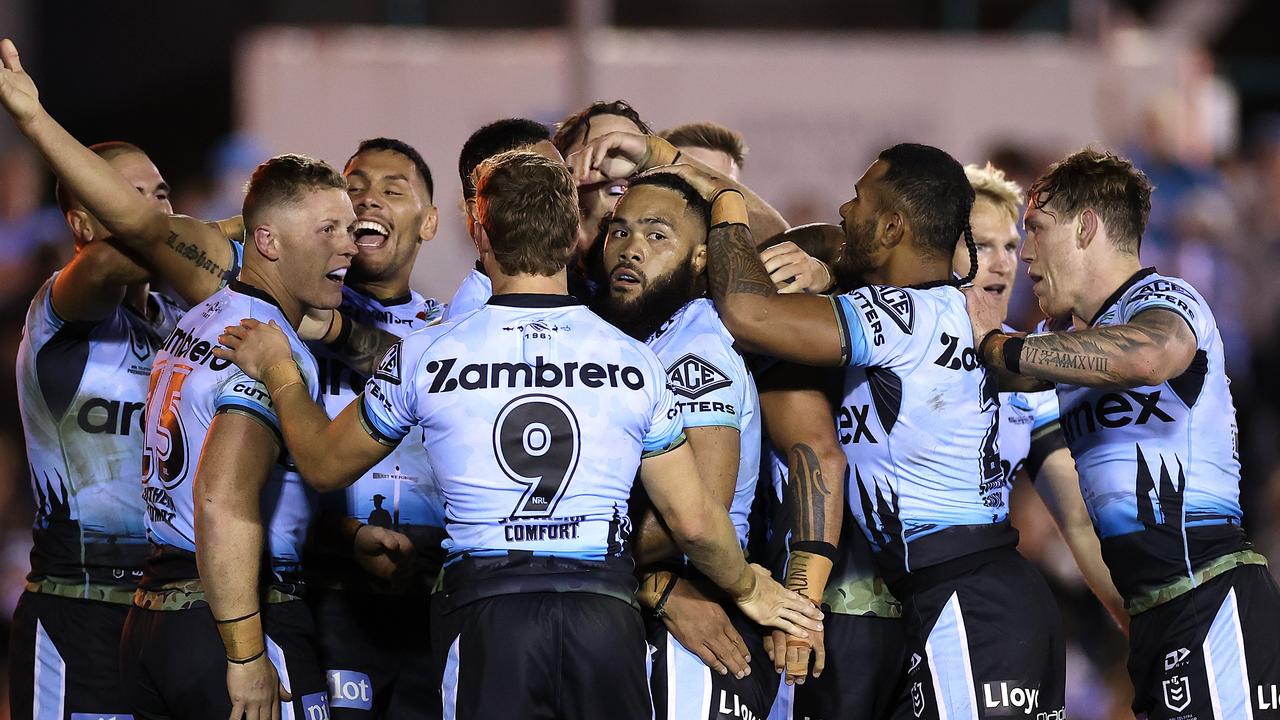 NRL fans have been stunned by Siosifa Talakai’s barnstorming display that is being labelled the best individual half of football ever.

Cronulla’s Siosifa Talakai has torn Manly to shreds in a demolition job from an individual player rarely seen in the NRL.

The Sharks came out firing and Talakai scored in the very first minute of the game. But that was only the start of his barnstorming performance.

Cronulla scored six tries in the first half — Talakai scored two and set up three others as Manly’s defence on its right edge was picked apart.

The hulking centre scored his second try in the 14th minute and unselfishly set up Ronaldo Mulitalo for a first half double of his own.

Cronulla kept passing Talakai the ball and the highlight play came when he made another line break and opted to grubber the ball, which sat up perfectly for fullback William Kennedy to score under the posts.

The Sea Eagles were lost for answers and Teig Wilton kept the points coming with a try on the stroke of halftime.

The Sharks led 32-0 after the opening 40 minutes and viewers were gobsmacked by Talakai’s epic performance in the first half.

“It is left-hand lunacy. They are scoring points for fun on this side of the field.

“My goodness. This is something to watch tonight. You rarely see the likes of this, one man out of a team of 13, single-handedly destroying the opposition.”

Michael Ennis said: “This is ridiculous! It’s like Under 7s out there, look at him.

At the NRL level that is so difficult to do. To be able to carve up in the way that he is, is quite phenomenal. His numbers are outrageous.

“Manly on that right edge are terrified of what he’s doing.”

NRL fans were in awe of Talakai’s unstoppable form in the first half.

CODE Sports’ Lachlan McKirdy tweeted: “Has there ever been a more dominant half by a centre in the history of rugby league?

Sports reporter Scott Bailey said: “This is the greatest 30 minutes a centre has ever produced. Ever. In any sport.”

AAP’s Ed Jackson said: “Talakai … a wrecking ball with light feet and the ability to find a pass like he just did then for Mulitalo. Scary.”

And if it wasn’t bad enough for Manly, Haumole Olaka’uatu Olakau’atu was sent to the sin bin for a high shot on Aiden Tolman.