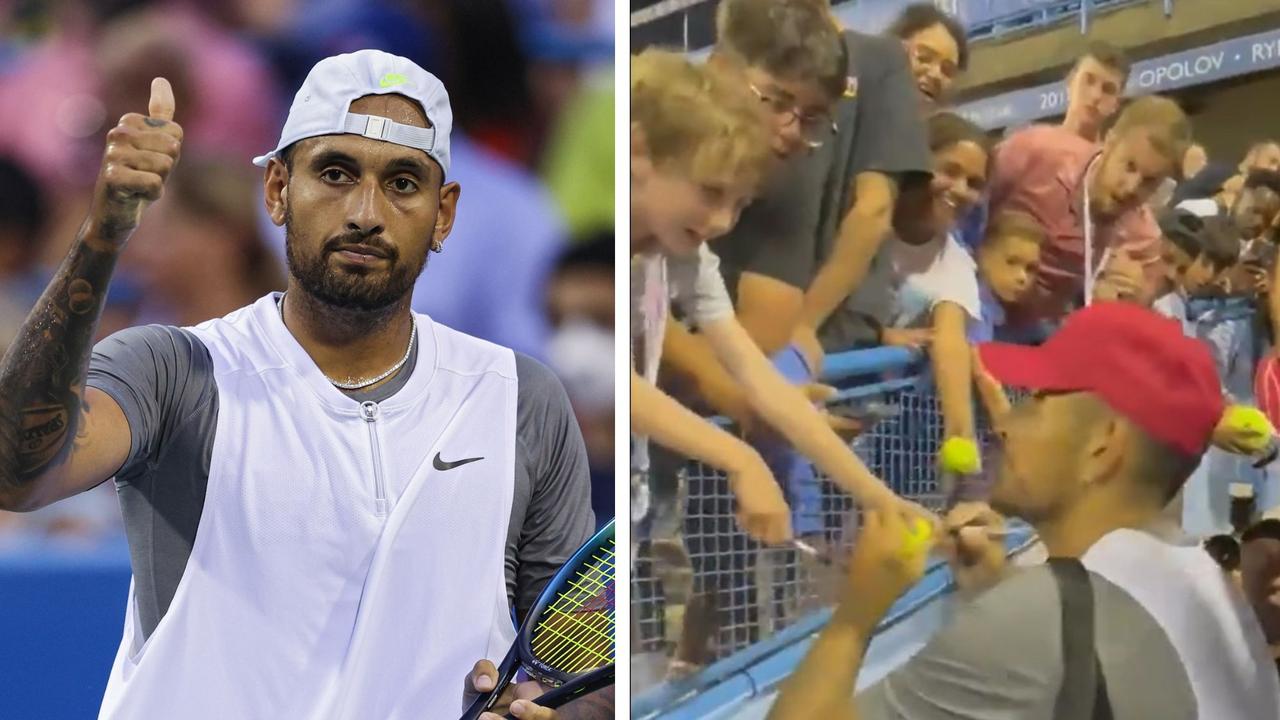 A sleepless Nick Kyrgios is through to a second straight final after his Wimbledon performance, downing Mikael Ymer 7-6 6-3 to reach the Citi Open final in Washington.

While Ymer is ranked 115 in the world and Kyrgios is fresh off a Wimbledon final, it may not be too surprising but it has already been a gruelling week for the Aussie.

Kyrgios is ranked World No. 63 after the ATP didn’t allocate points from Wimbledon in protest to the All-England Club’s stance banning Russian and Belarusian players because of the invasion of Ukraine.

So far in the tournament, he defeated American World No. 53 Marcos Giron and 14th seed Tommy Paul, before he needed to finish off fourth seed Riley Opelka and 10th seed Frances Tiafoe on the same day.

Lightning had halted play in the Opelka match, meaning it finished on the same day of his epic three-setter against Tiafoe.

In fact, Kyrgios didn’t get off the court against Tiafoe after his 6-7 7-6 6-2 win until after 1am, and still signed autographs.

Kyrgios also continued to win over the US fans, taking a second to share a moment with a young kid who was desperate for his signature.

Kyrgios revealed after his win over Ymer he didn’t get to sleep until just before 5am.

“I didn’t get to sleep until 4.50am, I just had so much adrenaline after (the Tiafoe win),” Kyrgios said.

“I got some treatment and my body was just so sore after last night. It was an epic battle.

“I didn’t really do much today but I felt like my energy was a little flat early on today and it’s understandable, I’m only human.

“My adrenaline for the final is going to be right there and I’m super excited for it. I’ve got doubles tonight, work on my returns a little bit. I returned pretty poorly tonight I’m not going to lie, so hopefully I can turn it up a little tonight.”

Kyrgios is also playing doubles, so his day in Washington isn’t over.

Teaming with American Jack Sock, the pair will play French duo Edouard Roger-Vasselin and Nicolas Mahut in the quarterfinal, but the winner will go straight through to the final.

The semi-final opponents of Tiafoe and Aussie Alex de Minaur have already withdrawn.

Ivan Dodig and Austin Krajicek are already waiting in the final.

If Kyrgios and Sock win, it will lead to a double header on the final day in Washington for Kyrgios, who is scheduled to play in Montreal next week as well.

Kyrgios’ final run in Washington will be just the second time he’s made the Championship match of an ATP 500 tournament, achieved when he won Washington in 2019.

He was knocked out in the first round of last years’ tournament, meaning he’ll claim 500 rankings points if he wins.

Kyrgios said downing Ymer he was just pleased to get through the day.

“That was kind of the roles reversed, I’ve been on paper the underdog in my last four matches but today I definitely feel I was the favourite. I served pretty solid obviously, my winning percentage on first serve would have been high but from the back of the court I didn’t play well at all.

“The difference was he stands on the back fence and makes you play that extra ball, he’s an incredible athlete, I really wasn’t expecting him to be that fast, he is lightning. Maybe next time I might have to adopt different tactics, maybe not try to out rally him and come forward a little more.

“It was a tough fought semi-final and I’m just happy to be in the final once again.”

It’d been a brutal tournament all around for Kyrgios, who was drug tested at midnight after his first round match against Giron.

After the ordeal, Kyrgios said it wasn’t the same for seeded players.

“I think a seeded player doesn’t even play his first round,” Kyrgios said.

“Last night, I played a first round, tough first round, and I got drug tested until 12am midnight and expected to play tonight. He (a seeded player) gets to bed at the time he wants to get to bed. Eats what he wants to eat.

“I was told to eat in the cafe when there was no food. These are just things I think a seeded player won’t have to deal with.”