The Federal Government has today unveiled an $800 million package which will be used to bolster Australia’s strategic claims in the Antarctic.
Prime Minister Scott Morrison announced the new funding during his visit to Tasmania.

The money will be spent on scientific research, but also a fleet of surveillance drones to further support Australia’s security in the region and counter potential moves by China.

“It’s about … our strategic security interests and our intelligence and defence capabilities,” Mr Morrison said.

Australia will also invest in underwater drones and medium-range helicopters, which can be launched from the new Antarctic icebreaker, RSV Nuyina.

When asked if Australia was concerned about powers such as China making moves in Antarctica, Mr Morrison said “not everybody respects” treaties in the region.

“This gives us eyes on Antarctica,” he said.

“Because there are others who have different objectives.

Mr Morrison said China “don’t share the same objectives as Australia as a treaty nation when it comes to protecting Antarctica”.

Without naming nations, Mr Morrison said others may “seek to exploit (Antarctica’s) resources”.

“Exploitative interests” could include activities like mining, drilling and fishing.

Mr Morrison said the total government spending on its Antarctica program will rise from $2.2 billion to $3 billion over the next decade.

The program will also create and maintain jobs in Tasmania, the Prime Minister said. 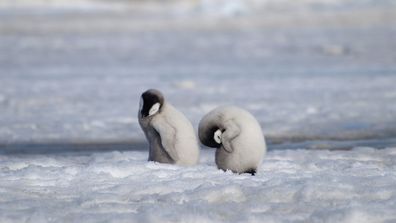 Why this emperor penguin colony has nearly disappeared

“That’s directly in the $800m we’re putting in place and an increase of 100 on what we’re already doing right now,” Mr Morrison said.