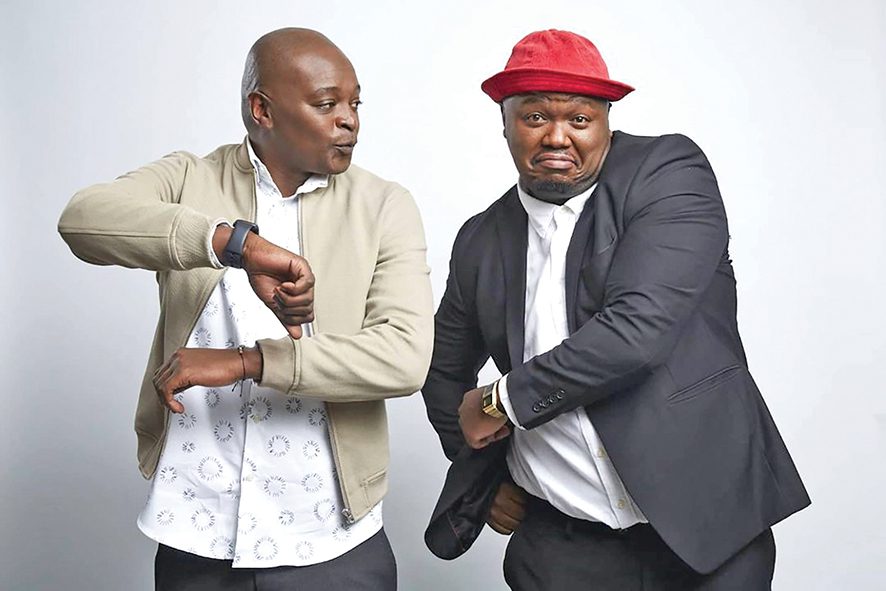 Kaya FM’s breakfast show hosts Skhumba Hlophe and Thomas Msengana’s future at the station is hanging by a thread.

Msengana and Hlophe, a revered comedian, have been removed from the breakfast slot by the station mandarins as part of their brand repositioning strategy to grow listenership and advertising revenue.

Negotiations over whether their contracts should be renewed are underway.

The pair, who have been tickling the funny bone of the listeners with their hilarious jokes, will present their last show at the end of this month.

Sunday World was unable to establish who their replacement may be at the time of going to press, but word has it the station is talking to the host of a show at a rival station to take over the prime time slot.

News of their removal from the popular show was revealed by two station staffers who did not want to be named because they are not allowed to speak to the media. The first staffer said that Hlophe and Msengana were removed from the show because the ratings have dropped drastically and the show has struggled to attract advertising.

The source said Msengana, who was working on the daytime show before teaming up with Hlophe for the breakfast show, was just collateral damage. “In fact, Skhumba was supposed to be the only one gone. The feeling is that Skhumba might be a talented comic but he is not radio material,” said the staffer.

Another staffer said management informed them that if they are given new contracts, the two might be moved to a graveyard or weekend slot.

“That is if they agree to the terms of their new contract. You can’t be paid the same when you are presenting a graveyard slot,” said the staffer.

“If they fail to find each other, they will, unfortunately, have to leave at the end of this month.”

Kaya FM publicity officer Helga Klizanie couldn’t deny nor confirm the removal of Hlophe and Msengana from the show and said the station will make an announcement when the time was right.

“As a competitive business, we proactively assess our business position from time to time, if our assessments point to any required shifts in the line-up, we will hold engagements with the affected talent, and any announcements to the public will be made when the time is right,” she said.