A member of the public has reportedly been arrested after rushing at Queen Elizabeth II’s coffin while it was lying-in-state before the funeral on Monday.

The man was quickly taken to the floor by police officers before being removed from Westminster Hall. 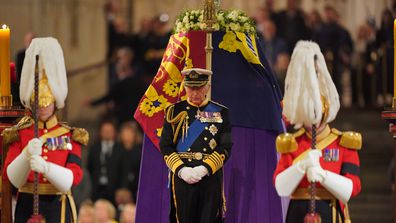 “He was arrested for an offence under the Public Order Act and is currently in custody.”

The livestream of people streaming through to pay their respects ﻿was cut off during the incident.

Meanwhile, the﻿ surging tide of people lining up to file past Queen Elizabeth II’s coffin are facing a wait time of up to 24 hours.

The British government warned that it would take more than 24 hours of waiting to cover the official eight kilometres from the start of the line in Southwark Park to the coffin at Parliament.

The government also warned that “overnight temperatures will be cold.”

However, there is a queue before the official eight-kilometre line begins.﻿

9News reporter Christine Ahern stood amongst the masses and pointed to the “thousands” of people in the unofficial line waiting to reach the official pilgrimage to see the Queen’s coffin.﻿

Ahern said people of all ages have joined the line from babies to people in their 80s.

People in the queue facing a gruelling 24-hour wait told 9News it was a “once-in-a-lifetime” experience and they wouldn’t miss it for the world.

“She was an inspiration to us. She was just a wonderful person and she did so much for the Commonwealth,” one person said.

“Everyone is happy. We’ve met some nice people in the queue and we’ve shared memories so that’s what’s great,” another person said.﻿

One man is prepared to line up for 24 hours despite being on crutches after having had a hip replacement recently.

“There’s a lot of people more worse off than I am. This is a few crutches really. Nothing to worry,” he said.

The man lined up to pay respect to the Queen’s duty and effort as she’s a “great example”.

﻿”It’s just a case of history in the making. So bringing my wife and children along really,” he said.

Late on Friday authorities had to temporarily halt the kilometres-long queue as too many people had joined the long procession to pay their respects.﻿

Members of the public who had lined up for hours to pay their last respects continued to file past as the royals stood vigil in the historic event.