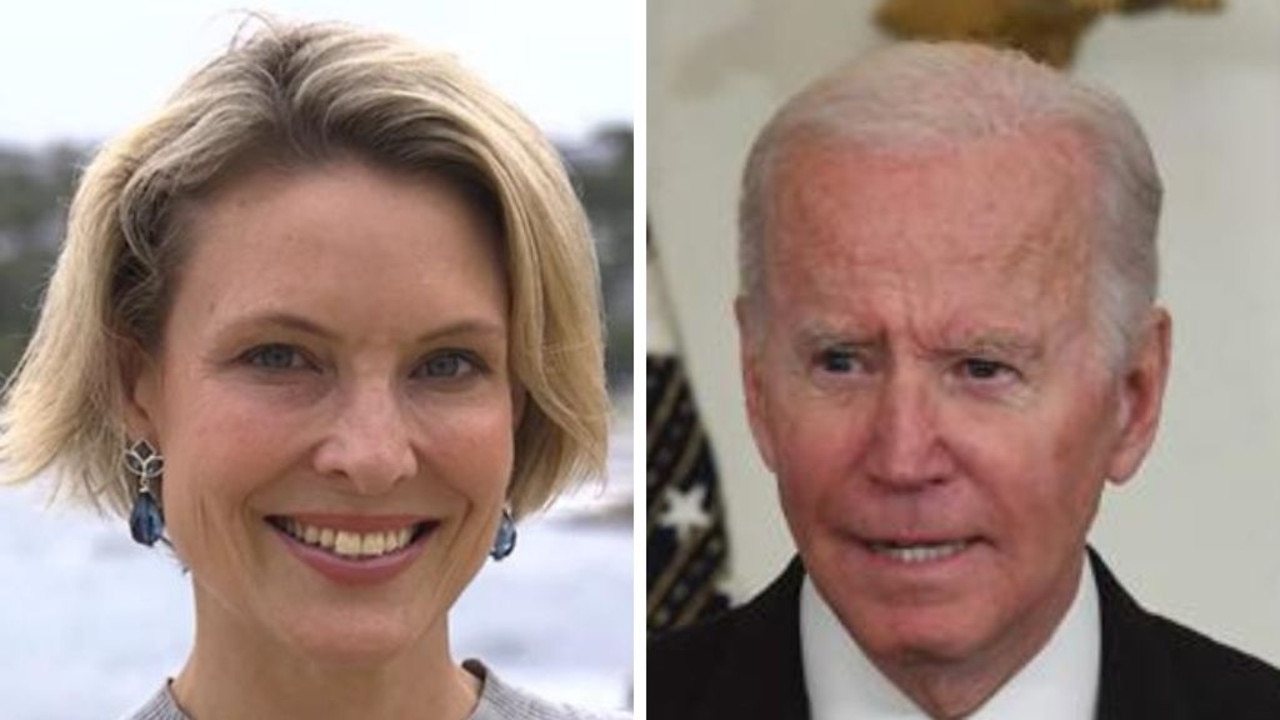 Liberal candidate Katherine Deves declared US President Joe Biden is “clearly showing signs of dementia” on social media this year before deleting her account when the Prime Minister announced her as his ‘Captain’s Pick.’

In the latest unearthed tweets to emerge, Ms Deves complained about the US President’s support for “very powerful and incredibly dangerous” transgender activists.

“At this stage, I do not believe Biden is capable of thinking much at all, he’s clearly showing signs of dementia,’’ she said in a tweet published on January 6, 2022.

It has also emerged that one of the vile anonymous tweets that the Liberal Party provided as an example of the death threats that prompted Katherine Deves to call in the police is nearly a year old and pre-dates her decision to contest the seat of Warringah.

News.com.au has reached out to Ms Deves for comment.

Ms Deves revealed on Sunday that she was so alarmed by online threats that she called in the police in an interview with SBS Australia.

“I have received death threats, I have had to have the police and AFP involved, my safety has been threatened, my family are way out of Sydney because I don’t want them to witness what I am going through and nor do I want their safety put at risk,” she said.

That same night, a media outlet reported that “a particularly vile message sent to Ms Deves, and obtained by Daily Mail Australia, read: ‘If you ever comment transphobic s**t on my feed again I’ll burn you and stick my girl c**k down your neck.’

The same tweet was also provided to news.com.au by the Liberal Party as an example of the vile abuse the candidate was facing.

However, when asked when the threat was made and on what platform it was made, the Liberal Party said they were “still trying to find that out.” on Monday, April 25.

On Wednesday night, a search of this new data uncovered the vile threat that the Liberal Party has been referencing was actually first posted in August, 2021 but an overseas account with 7 followers.

It first appeared as a screenshot on her Ms Deves Twitter account in August, 2021, when Ms Deves complained that the social media giant Twitter did not regard it as a breach of guidelines.

There is no doubt that Ms Deves has copped abuse online – regardless of whether or not the evidence provided by the Liberal Party is seven months old.

In more recent posts online, an anonymous account tagged her deleted account to observe “ask your doctor if dying in a fire is right for you. #scum.”

This threat was made in April 15. On the same day, the anonymous account stated “I have no qualms helping to set bigots on fire, if that would help you out? It’s akin to killing vermin.”

Some media outlets have questioned precisely when the matter was reported to the police.

The Liberal Party insists a “text message exchange” confirms that someone did contact local police who referred it to the Australian Federal Police.

The AFP established a special task force which focuses on reports of electoral-related crimes, including threats to MPs and candidates.

Known as Operation Wilmot it is working closely with state and territory police forces on the issue of election safety and does not comment on current investigations as a matter of policy.

The task force was set up in the wake of threats being made to multiple MPs, with this election being the first time such a unit has been in operation.

Ms Deves, who is contesting the seat of Warringah, deleted her social media account on March 28, just weeks after she declared her Twitter account to the Liberal Party in her March 10 nomination form.

The account was wiped just days before she was announced as “Captain’s pick” candidate on April 2.

However, it lives on through the Wayback Machine that archives deleted tweets and new technology that allows those tweets to be downloaded and more easily searched.

However, a spokeswoman for NSW Police told AAP on Monday: “The NSW police force has not received any reports of threats made.”

The spokeswoman reminded members of the public to report any such incidents.

A spokeswoman for the Australian Federal Police told AAP: “The AFP does not comment on matters that may be the subject of investigation.”

Liberal candidate Katherine Deves appears to have compared Defence Minister Peter Dutton with Lord Voldemort in a reference to a cruel internet meme.

Ms Deves – a self-described major fan of Harry Potter books and author J. K. Rowling – made the reference in the latest unearthed tweet to emerge.

“New Speaker of the House for Commonwealth of Australia struggles to keep order as Albo (Leader of Opposition) calls Voldemort (Minister for Defence Leader of the House) “boofhead”, she wrote.

The tweet was published on December 1, 2021. At the time she had applied to join the Liberal Party.

News.com.au has contacted the Liberal Party and Ms Deves for comment.

In other new unearthed tweets she refers to surrogacy as “prostitution” and makes more references to the Holocaust.

In another, she opines on free market capitalism replacing the social democratic model at the end of the 1970s.

“As you know I’ve stood strongly to ensure Katherine continues on as our candidate,’’ he said.

“I check in pretty regularly with her, particularly after I saw those terrible reports about the threats. She’s okay, but I think we need to take a bit more care given those threats. We’ve got to stop walking on egg shells in this country.”