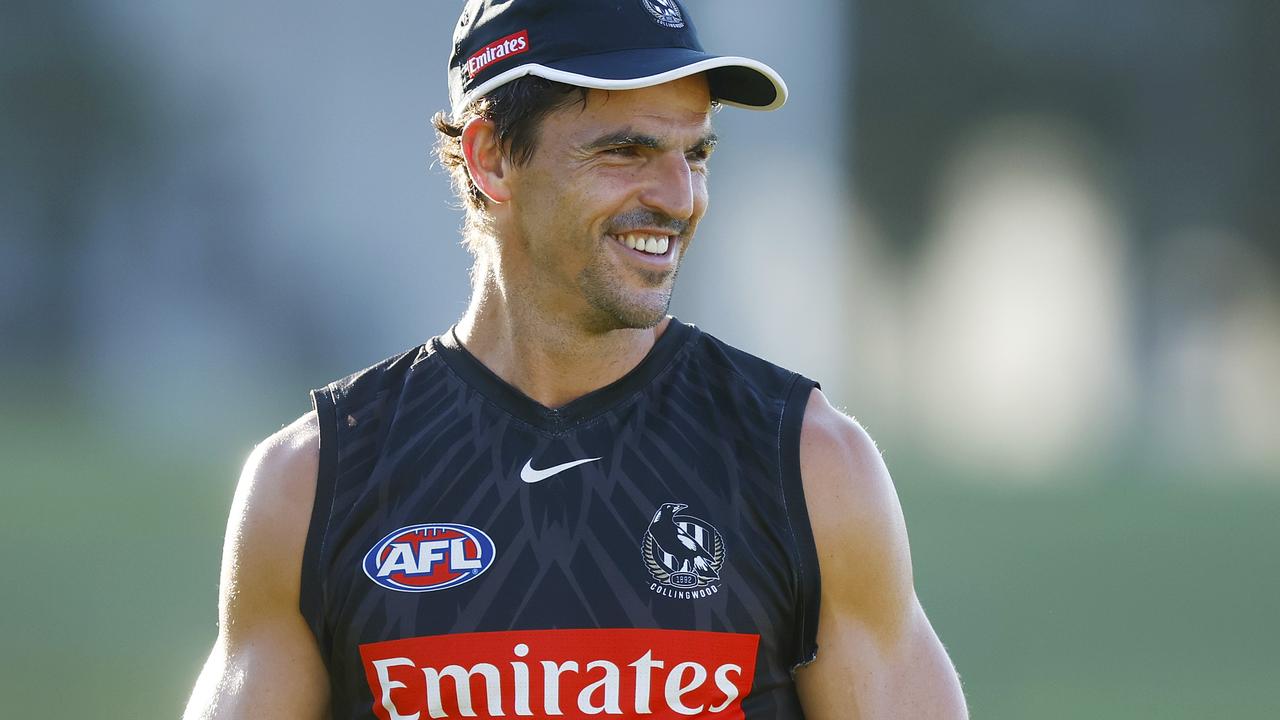 Scott Pendlebury spent this past off-season getting faster and lighter.

At age 34, Collingwood’s games record-holder and longest-serving captain – he is preparing to lead the Magpies for a ninth-straight year – is still ploughing on with his seemingly endless pursuit to get better.

That’s why Pendlebury sucked up his pride and signed up to train, alongside on-footballers and peers from Collingwood and rival clubs, with The Speed Project’s Jarrad Kay.

In the back of his mind was his much-discussed positional shift from the midfield to half-back, where he won’t cop as many bruising knocks but will need to run more.

“Honestly, that was pretty daunting, knowing you’re going to be the slowest guy there,” Pendlebury told News Corp.

“We were essentially on a running track learning how to sprint.

“I was comfortably the slowest when I started, but, individually, to add four or five kays to your top-end speed in 12 weeks was massive for someone like me.”

Understanding Pendlebury is knowing he accepts he doesn’t always have a great football-life balance – and that he doesn’t think that’s a weakness.

He’s obsessive. Almost everything he does is geared towards maximising himself as an athlete.

There’s his Tempur bed sheets where he can control the temperature he sleeps at, the magnesium in his home pool, his sauna, and even the Archies thongs he swears by to maintain his country roots but also his elite mentality.

We will get to Pendlebury’s eating habits later.

He turns off the solar heating on his pool once football season arrives and it effectively transforms into an ice bath at 10 degrees.

Pendlebury starts the day after games right there – for 11 minutes – then switches to the sauna for about 40 minutes, before moving onto the exercise bike in the fully equipped gym he paid for during the Covid-19 pandemic.

“I sound like a bit of a psycho with this stuff, don’t I?” Pendlebury said.

He entered the AFL as a teenager having broken his left foot playing basketball about a year earlier, then did the same on his right not long into his Magpies career.

Both breaks were to his fifth metatarsal bone.

Pendlebury insisted on still wearing thongs, so club podiatrist Bec Morarty introduced him to the arch-supporting Archies, which promote themselves as everything thongs typically aren’t (in a good way).

He heard all the whispers around the corridors from the old stagers when he was still a kid about how they all wished they paid more attention to recovery and nutrition.

Pendlebury promised himself then not to be one of those regretful veterans.

“I just gravitated towards that stuff and thought if I did all that now, then maybe I’ll feel better at 28, 32, 34, whatever age it is,” he said.

“I’ve done the little things since my first year and I’ve continued that for a long period of time.

“That means going down to the beach three nights a week for 20 minutes and learning a lot about what actually is a good diet and nutrition – performance nutrition – and investing time and money to learn about that space.

“It helps that my wife (Alex) is a nutritionist, but it’s just a quest for knowledge and improvement.

“I’ve never been one that’s said ‘No’, so I’m always happy to have a go at things and see if it might make me a little bit better.”

Studying the greats from various sports

NBA superstar LeBron James famously spends US$1.5 million a year to maintain his body, once costs are factored in for his home gym, trainers, massages, therapist and nutritionist, among other things.

Another evergreen sporting legend, NFL quarterback Tom Brady, has his own fastidious approach, from an all-natural diet, no alcohol, plenty of sleep and a focus on flexibility over lifting heavy weights.

Pendlebury couldn’t put an exact figure on what he spends annually said anything he did, so long as he saw a benefit, was seen as an investment rather than a cost.

“I love the NBA and NFL and it’s different, but on the nutrition side of things, there’s a lot to learn from boxing and UFC, with what they go through with weight cuts and rehydration strategies,” he said.

“I consume all that sort of stuff, even if it’s jockeys with their hydration and how they do all that. I try to learn from other athletes and teams.”

Pendlebury even picked world champion boxer Manny Pacquiao’s brain on his own training habits when they crossed paths five years ago.

What stuck with the Magpie most was the amount of core training Pacquiao completed, so he tried one day to replicate one of the Filipino’s sessions.

“I remember just with my brothers mucking around and we did a session that he would do and I could barely laugh for a week, I was that sore,” Pendlebury said.

“Again, I just like to try things like that to see if I can incorporate it into my routine and get benefit out of it.

“LeBron James talks about how he does float tanks and cryo chambers. It gets you thinking and it’s a bit of trial and error to see what might work for me.”

The off-season that’s anything but

Pendlebury said his wife would vouch for him being arguably as busy during the AFL off-season as at any other time.

You read that right. Take this off-season, for instance.

He did speed work at Moorabbin three times a week, another three footy-based sessions on an oval with teammates and was in the gym on six other occasions.

There were also weekly myotherapy with Mina Garas at My Body Clinic in Bentleigh.

“Mina is the best in the business,” Pendlebury said.

He will start season 2022 about 3kg lighter than he’s played at in recent seasons in preparation for his new football chapter in defence.

Pendlebury fractured his left leg again in December but that recurrence was never considered overly serious.

His sixth All-Australian selection was three years ago and his fifth and most-recent Copeland Trophy win as Collingwood’s club champion was in 2016 but don’t let that and his positional change fool you.

Pendlebury remains one of the Pies’ most critical players, evidenced by his third-placed finish last year in the best and fairest count.

“I feel like, individually, I’m performing well,” he said.

“I’ve had a really good off-season to set me up to play and, obviously, I’m going to play more down back this year, so I’ve lost a bit of weight.

“I feel like I’m on track to have a good season and influence and hopefully help Collingwood get up the ladder.”

Team success, namely experiencing that 2010 premiership feeling at least once more is still his great motivator, rather than becoming the next AFL player to reach 400 games.

Where does family fit in?

Pendlebury is a father-of-two these days – son Jax and daughter Darcy – so he’s had to become more organised to remain so dedicated.

“I’m locked in when I’m at footy and give everything I’ve got, then one thing I’m pretty good at saying is no to things,” he said.

“I’m ruthlessly efficient with my time, because I don’t like to do things that take away time that I could spend with my family.

“I used to have a lot more time up my sleeve, whereas sometimes now it’s like, ‘I’d rather be at home shooting hoops with Jax’, because that also fills my cup and makes me happy.”

That doesn’t mean Pendlebury has lost any of his edge. His average in-season week is still as regimented as ever.

Just like his go-to, day-after-a-game recovery routine, he does the same things three, two and one day out from playing.

Pendlebury didn’t want to share exactly what he eats on match day – he didn’t want to give up any advantage he holds over competitors – but the science behind his approach is obvious.

He has figured out which types of carbohydrates and sugars to consume, at what time and how close to a game.

“It’s obsessive but I’m just trying to get better. I don’t want to be defined by a number, like being 34 now and (the narrative) ‘It could be your last year’,” Pendlebury said.

“I’m trying to get better every day and not put limits on what I can do. I feel like that’s how all athletes should operate – why put a ceiling on yourself?

“Just do you and have fun. I love the process of it as well, so I don’t see it is a chore. I love training and trying new things and feel really good from staying fit and healthy.”