A house has been destroyed by fire after a suspected lightning strike in Western Sydney as the city, NSW Blue Mountains and Central Coast were lashed by an intense storm.

Fire and Rescue NSW (FRNSW), which suspects lightning set the Glenmore Park house alight, said despite battling the flames, the home was destroyed.

Crews were called to Kobina Avenue at 5.30pm and stopped the flames from spreading to neighbouring homes.

“They battled the blaze, which took hold in the roof of the property, and quickly contained the flames,” a FRNSW spokesman, said.

“However, they were unable to save the home.”

The moment lightning hit the house was caught on dashcam footage.

In parts of Sydney, more than 19mm of rain fell in just 15 minutes tonight.

The M4 and suburban roads in the city’s west were hit by flash flooding.

Some people were seen wading in water, pushing cars.

Wind gusts of more than 90km caused trees to fall and a shop roof caved in at Nepean Village Shopping centre in Penrith. 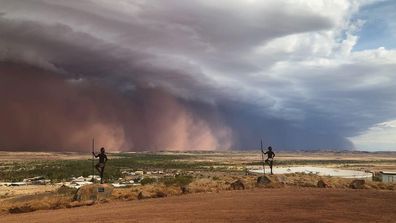 A thunderstorm warning issued as the storm moved further north towards Newcastle has now been cancelled.