Melbourne community groups have taken to humanely trapping and euthanising myna birds in an effort to get rid of the often loud and aggressive birds.

However, bird experts have warned the groups’ efforts are likely to be largely futile.

Community groups across Melbourne, from Mornington to Mernda, have taken to trapping and culling the introduced birds known for scavenging and displacing natives.

The birds are native to India and Southern Asia and were brought to Melbourne in the 1800s in an effort to control insects infesting the city’s market gardens.

Mornington Men’s Shed volunteers make and sell Indian myna traps for $75 per cage and the devices are quickly being snapped up.

“We probably make between four to six a week,” David Wirth from the men’s shed said.

He said the birds were “a real pest”.

“They’re probably the peskiest birds in the whole of the bird kingdom,” Mr Wirth said.

Permits are not required to legally trap the birds, but they must not be caged for longer than 24 hours. 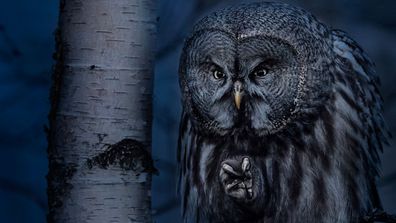 Stunning shots from Bird Photographer of the Year Award

Avian enthusiasts have asid extermination of the captured birds should be conducted only by veterinarians or qualified council animal handlers.

Max Burrows from Birdlife Mornington Peninsula said disposing of the birds should be done “properly and thoughtfully”.

However, he said backyard trapping efforts were unlikely to reduce the overall myna bird population.

“They very quickly re-colonise areas that have been cleared out.”