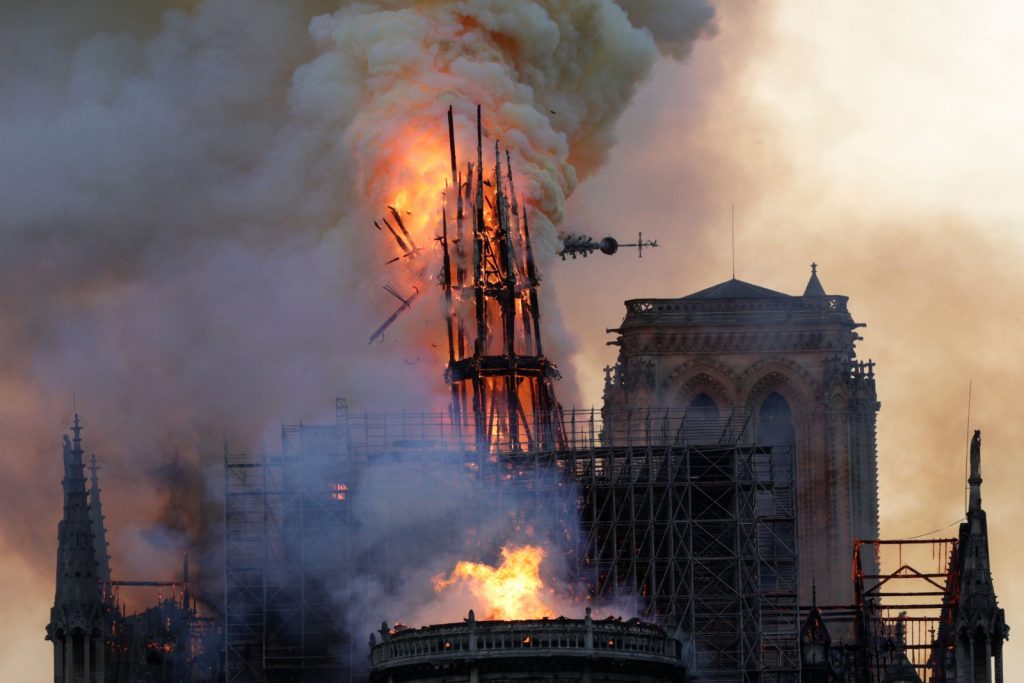 During rebuilding work on the fire-damaged spire of Notre Dame Cathedral in March, workers discovered a well-preserved lead sarcophagus — a coffin — buried about one meter (3.3 feet) under the floor.

The find was announced last week, one day before the three-year anniversary of the devastating fire that engulfed Paris’ 850-year-old cathedral.

During the fire, the vaulted ceiling crashed to the floor and opened up a 19th-century heating system and, underneath, a series of layers. Those layers contained the coffin, among other objects, including painted sculptures, that were discovered in March.

Experts are speculating that the discovered sarcophagus dates back to the 14th century.

“If it turns out that it is in fact a sarcophagus from the Middle Ages, we are dealing with an extremely rare burial practice,” said Christophe Besnier, an archaeologist with the National Institute for Preventive Archaeological Research (INRAP), during a press conference at the site on April 14.

Besnier said that the 19th-century architect and restorer Eugene Viollet-le-Duc discovered sarcophagi made of lead in French churches, but said they were more modern, having been found with a funeral plate used to identify the dead.

“Here, we don’t have a funeral plate and, if you look at the period, it’s still a hypothesis; it’s from the 14th century or a bit later,” Besnier said.

He said his team at INRAP would soon open the sarcophagus to reveal the skeleton’s gender and former state of health, adding that carbon-dating technology could be used.

So far, the team has peeked into the sarcophagus using an endoscopic camera. The upper part of a skeleton, a pillow of leaves, fabric and as-yet-unidentified objects have been revealed. It is the start of a potential treasure trove of information about the cathedral’s medieval past.

Remains could be a ‘high dignitary’

Anyone buried in such an auspicious location is likely to have been from the Paris elite.

“We’re not on any place; we’re on the island of the Seine, in Notre Dame,” Besnier said.

“Considering the characteristics and location of the sarcophagus, the hypothesis of a burial of a high dignitary seems probable,” the French Ministry of Culture said in a press release.

This hypothesis is backed by the sculpted elements also found at the site, which were identified as belonging to an old rood screen — the ornate partition at the front of the church — that was built around 1 230 AD and destroyed at the beginning of the 13th century.

Viollet-le-Duc found other fragments belonging to this screen, which is now on display at the Louvre Museum in Paris. “It is therefore a discovery of the greatest interest,” said the ministry.

The INRAP team also discovered numerous other artifacts, including a stone sculpture of a human head resembling Jesus, and decorative stone fragments with paint traces.

“We uncovered all these riches just 10-15 cm (4-6 inches) under the floor slabs,” Besnier said. “It was completely unexpected. There were exceptional pieces documenting the history of the monument.”

The discovery was “an emotional moment,” he said.

Should the coffin be opened?

Many on social media are calling for the coffin to remain unopened, proposing — often in jest — that evil forces might be unleashed if the sanctity of the dead is disturbed.

Some argued that horror novels by US author Stephen King, including 1983’s “Pet Sematary,” should be a warning not to awaken evil spirits.

“What part of a ‘human-shaped lead sarcophagus’ buried under the holy ground of a cathedral do they not get means DON’T OPEN! You want to see a Antediluvian vampire?” tweeted @DFW_DM_Monty.

INRAP head Dominique Garcia confirmed that the examination of the body will be “in compliance” with French laws on dealing with human remains.

“A human body is not an archaeological object,” he said. “As per human remains, the civil code applies, and archaeologists will study it as such.” – DW