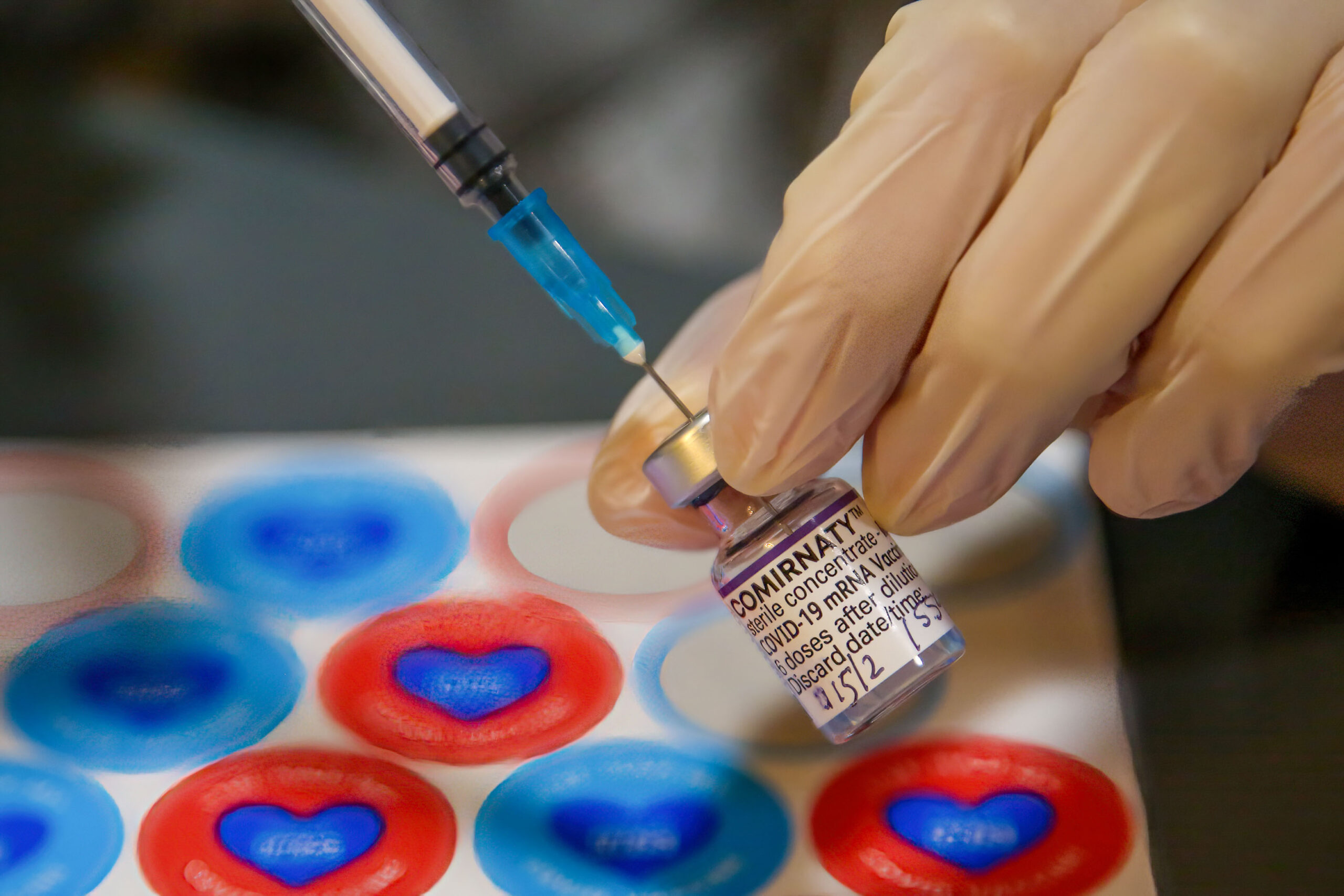 The hope that more vaccinated people will return for their second Pfizer Covid-19 vaccine doses and boosters was one of the main reasons behind the health department’s decision to halve the waiting period between first and second doses (from 42 to 21 days) and second doses and boosters (from 180 days to 90 days), according to the department’s Nicholas Crisp, who heads up the vaccine roll-out.

According to health department data, 18.93% people vaccinated with Pfizer’s Covid vaccine don’t return for their second dose within 42 days. People between 50 and 59 years do the best with getting their second jabs in time (only 7.7% don’t go back within 42 days) and those between 18 and 34 years the worst (30.12% don’t get their second shots within the required period).

This is twice as high as data from the United States Centres for Disease Control, which shows that about 9% of people who got their first dose of Pfizer didn’t come back for their second dose.

Most European countries, and the US, use a 21-day interval between first and second Pfizer doses.

Crisp says South Africa now has significantly more vaccines than it had in May 2021 when South Africa’s roll-out started, so it no longer needs to save second doses to get as many people as possible vaccinated with an initial dose.

Over the past six months, the country’s vaccine uptake has dropped steeply, from an average of 157 309 daily doses in October to 54 013 daily doses in February.

The decrease in uptake could lead to some of the country’s Covid-19 vaccine doses expiring before they’re used, Crisp says. “The challenge [with doses expiring] starts at the end of March, but June and July are the biggest challenge. So we have time to pick up pace and, if we don’t use our doses fast enough, to see if our neighbouring countries can use any of that stock.”

Will a smaller gap between shots increase uptake?

Immunisation programmes with one-dose jabs (such as the Johnson & Johnson Covod-19 vaccine) are normally more successful than programmes that require multiple doses.

But although some research shows that shortening the gap between doses can improve how many people show up for subsequent shots slightly, the health department’s ramped up timelines are unlikely to make a huge difference on their own, studies have found.

Educational messages and reminders (in print, via SMS or with a telephone call) remain the best way to get children and adults to come back for any type of vaccination, a Cochrane review of 75 studies found. Cochrane specialises in assessing research on health interventions.

The health department has been sending out SMS reminders to people to get vaccinated but this was interrupted for a few months between December and February because of budgetary constraints (the SMSes cost the department 16c per message) Crisp says.

However, the country’s most recent vaccine hesitancy survey, published in February and conducted by the University of Johannesburg (UJ) and the Human Sciences Research Council, shows that SMSes may not be enough.

It found that the biggest reason why people in South Africa who want to get vaccinated against Covid-19, but don’t do so, is because they don’t know where to go.

The UJ survey found that the second-most-common reason why people don’t get Covid jabs is the cost of transport and that the vaccine sites are too difficult to travel to.

What is a booster shot?

This week, the health department also announced that fully vaccinated people who would like to get a booster shot, can now “mix and match” boosters, so they can get a Pfizer booster after having been vaccinated with a J&J Covid-19 vaccine, or a J&J booster after two Pfizer shots.

Moreover, the waiting period between a second Pfizer shot and booster has been reduced from 180 to 90 days. J&J boosters are taken two months after one J&J jab.

Booster doses are called “boosters” because they are additional jabs given to people who are already fully immunised.

South Africa introduced boosters at the end of last year.

The current recommendation for Pfizer boosters in the US is that people receive them five months after their second shot, but in countries such as Germany, France and the Netherlands the waiting interval was shortened from six to three months in December.

The roll-out of booster doses in countries that first introduced boosters was initially focused on people who were more likely to fall seriously ill with Covid, for instance, older people or people living with diseases that weaken their immune systems. Because their bodies are not able to fight off infections as well as healthy people, such people may not be able to build up enough protection after receiving the standard number of vaccine doses.

But as more data has come out about immunity and with new variants appearing, the use of boosters has become more widespread globally.

In South Africa, the country’s medicines regulator, the South African Health Products Regulatory Authority, has approved Covid-19 vaccine boosters for everyone of 18 years and older.

Why would you need a booster?

Covid-19 vaccines were designed almost two years ago at a time when the SARS-CoV-2 virus, which causes the disease, was thought to be relatively stable. What that means is that scientists didn’t anticipate any drastic changes to the structure of the virus.

But now, five variants of concern later, the situation is very different.

Each variant that appears and begins to drive new infections comes with its own set of mutations, or changes, that reduce how well vaccines can fight the new variant off. The toll of these changes on how well a jab can protect you depends on the variant and its mutations.

Omicron, which was discovered in Southern Africa in November, is the version of the virus with the most variations in its structure. Omicron quickly became the dominant form of the virus globally, because its mutations allow it to spread faster than previous variants.

The problem is that because of their extensive structural changes (there are different forms of Omicron), Omicron has struck a blow to vaccine protection. Jabs are still able to keep you from getting seriously ill, but boosters increase that protection even more.

A December pre-print study found that mRNA vaccines (either Moderna or Pfizer) were only 36% effective at preventing people from getting infected with symptomatic Covid-19 within two months of being fully immunised. After six months, the jabs protection had waned to the point where  they offered no protection at all. But within a week of getting a third shot (so a booster), protection rose back up to 61%.

But despite the limited benefits against infection, the jabs are still proving to be prize fighters against severe disease.

South African data published in the New England Journal of Medicine found that two shots of Pfizer offered 70% protection against hospitalisation from Covid-19. Receiving a booster dose helped raise this to 90%, according to a January report from the US Centres for Disease Control.

Should you ‘mix and match’?

Now that you can choose your booster, which should you pick?

The health department recommends that people stick to the vaccine that they got during the first round.

There’s nothing wrong with going in for a double dose of the same vaccine, but some data shows that going for a mix and match approach may be more beneficial in terms of your body’s response.

A January study published in the New England Journal of Medicine showed that boosters work best when mixed and matched. Overall, taking a booster that was different from the vaccine someone was originally vaccinated with, helped their bodies to protect them better against Covid-19 than if they had taken the same shot.

Part of the reason for this is because vaccines work in different ways and don’t all provide the same types of protection at the same levels. The study, for example, showed that J&J jabs were better at providing long-term protection against falling seriously ill with Covid-19 (this is called T-cell immunity) and mRNA produced higher levels of antibodies (their main job is to protect you from getting infected). By mixing up the type of booster you get, you multiply the benefits of the different jabs.

A December review by the European Medicines Agency (Europe’s medicines regulator) found that a mix-and-match approach to boosters was equally or more beneficial than getting the same shot. The regulator recommended in favour of the mixing of jabs if it allowed more flexibility with both the supply and uptake of vaccines.

The review says boosters can be given as early as three months after your last vaccine, but recommends that people wait for longer than six months before getting a booster.

This story was produced by the Bhekisisa Centre for Health Journalism. Sign up for the newsletter here.