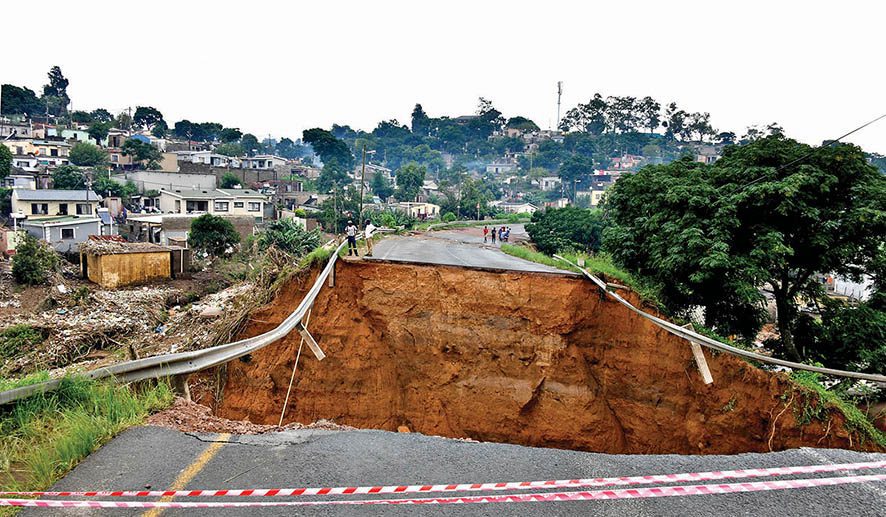 The recent devastating floods in KwaZulu-Natal, Eastern Cape, and the North West have shown that severe weather patterns have become a significant threat to lives, the economy and the environment itself.

Climate Change has become a topical issue globally with severe weather patterns – the cost of which developing countries can least afford. Local government plays a pivotal role in addressing the effects of climate change.

These were some of the remarks made by panelists during a webinar on the impact of climate change and changing weather patterns in society.

Tuesday’s webinar was hosted by the Government Communication and Information System (GCIS) in partnership with the Department of Forestry, Fisheries and the Environment as well as the South African Local Government Association (SALGA).

Speaking on the impact of climate change on the vulnerability of people, Sandile Maphumulo from SALGA, said that the government adopted the National Infrastructure Plan (NIP) with the aim to transform the country’s economic landscape.

She said that the key questions to ponder are how much of the investment is targeted at mitigating climate change and how much is allocated to building climate-resilient infrastructure.

“It is argued that drainage systems and poor infrastructure development contribute to the vulnerability of human settlement to climate change,” she said.

She emphasised that it takes citizens and the government to come together and respond to climate change.

Speaking about some of the lessons learnt from the recent floods, she said that the infrastructure and facilities that still exist today were designed decades ago without the future climate in mind.

Inequality is still a major concern, and within communities, some groups are more vulnerable than others.

“Newer infrastructure is too vulnerable to climate change due to poor tender systems and appointment of incompetent service providers, for example; corruption, BEE systems, engineers with lack of extensive experience.

“Local communities and municipalities are just not yet prepared to face climate-related threats,” she said.

“We should be using renewable energy sources, converting waste to energy, recycling instead of polluting and filling landfill sites.

“We should stop building houses in environmentally sensitive areas, fight against the illegal land occupation, illegal immigration, and infiltration of foreign nationals in our cities, towns, and economic areas,” she said.

Tlou Ramaru, Chief Director at the Department of Forestry, Fisheries and the Environment said that the challenges being experienced are extreme events, which include flooding, heatwaves, and drought.

Ramaru said that the department has developed a Climate Change Policy response of which its vision is to transition to a lower carbon and climate-resilient society.

The objective of the policy among others is to manage the climate change impact through interventions that build and sustain South Africa’s social economic and environmental resilience and emergency response capacity.

He said that the structure of the policy was around risk reduction and management to see how to reduce the risks associated with climate change while prioritising the adaptation to address all the observed threats.

In terms of the ongoing activities, Ramaru said that climate change sectoral adaptation plans have been developed by the following sectors at the national level: Water, Agriculture, Forestry, Fisheries, Health, Biodiversity, and Climate Change Policy Framework for State-Owned Companies and Rural Human Settlements.

“All nine provinces have developed climate change response plans. All 44 district municipalities and metros have been capacitated to mainstream climate change into Integrated Development Plan (IDPs),” he said.

He added that the National Climate Change Adaptation Strategy has been approved by Cabinet for implementation.