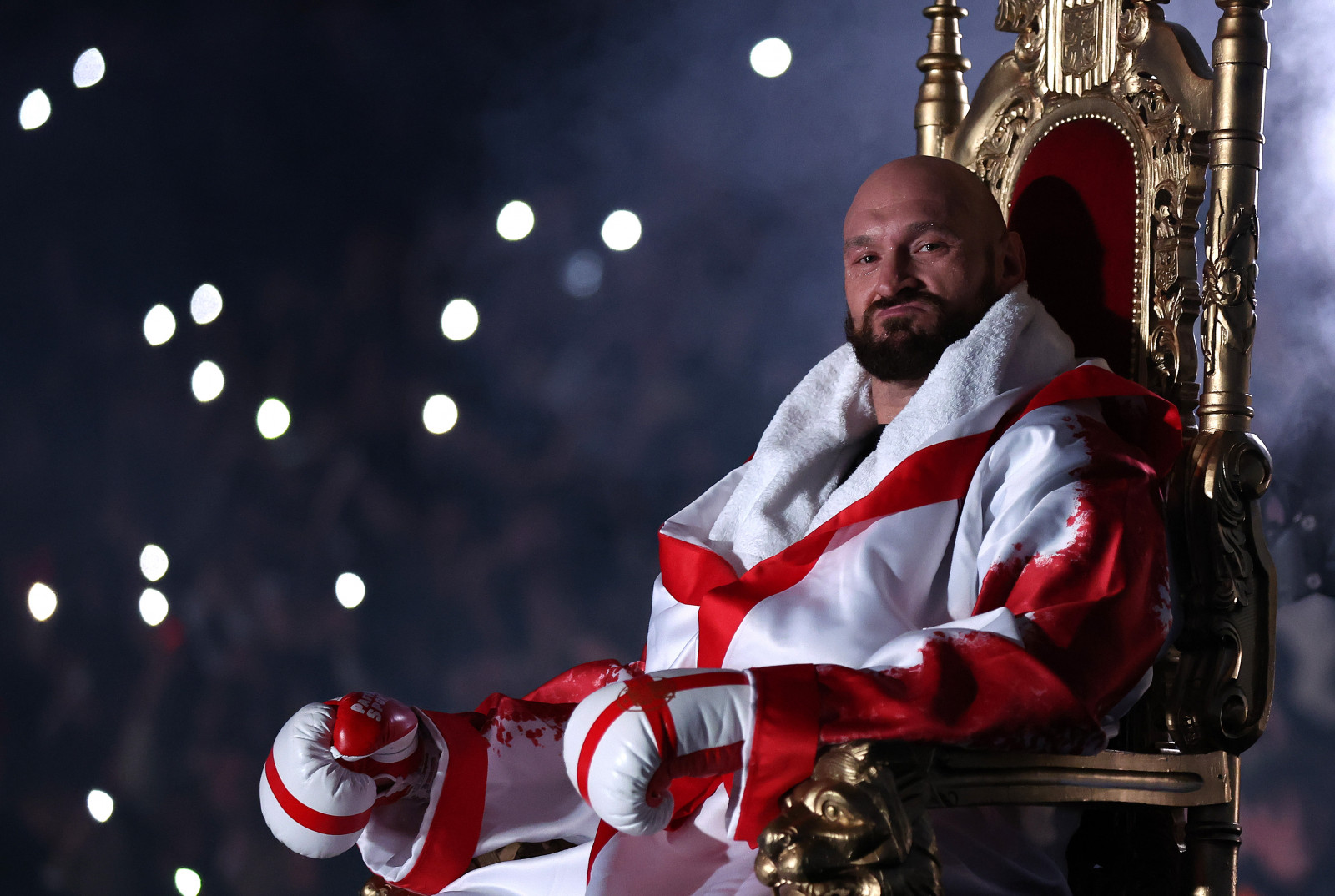 Where would you be if British heavyweight boxer Tyson Fury punched you with all the ripping power packed into his 2.06m and 120kg frame, and the experience of his 33 professional bouts? In hospital? Worse?

Happily, here in the real world we don’t have to think about that. Because we don’t have to put up with Fury. Not that it should be doubted that were he, for instance, involved in a road rage incident, he wouldn’t resort to violence. It’s surely the least a confirmed misogynist and homophobe could do, especially one who has been beating people up for a living since December 2008.

In April 2013, in the days before he knocked out Steve Cunningham at Madison Square Garden in New York, Fury told a reporter he would “hang” his sister if she was, in his estimation, “promiscuous”. The month before, he earned a fine of £3 000 for describing two other boxers, David Price and Tony Bellew, as “gay lovers”. He meant that as an insult, of course.

In December 2015, before he took four versions of the world heavyweight title off Wladimir Klitschko — brother of Vitali, also a former world champion and these days the mayor of Kyiv — in Düsseldorf, Germany, the noisily religious Fury said in an interview that the end of the world was nigh. “There are only three things that need to be accomplished before the devil comes home. One of them is homosexuality being legal in countries, one of them is abortion and the other one’s paedophilia,” he added.

In another interview, to talk about a previous interview, he said: “I believe a woman’s best place is in the kitchen and on her back. That’s my personal belief. Making me a good cup of tea, that’s what I believe.”

In October 2016, Fury relinquished his titles as an investigation loomed into his admitted use of cocaine and the banned anabolic steroid nandrolone. He claimed the latter’s presence in his body was caused by eating uncastrated wild boar. Had he not been a boxer, that might have been the end of his career. But fight fans, and the promoters and broadcasters who feed the monster, are made of less finicky stuff. That Fury is box office gold means more than anything else. So there was happiness when he returned to the big time by stopping Deontay Wilder in Las Vegas in February 2020 to win the World Boxing Council title.

But will Fury become too much for even boxing to bear? It’s complicated. He is celebrated inside and far outside the ring. A survivor of substance abuse and mental ill health — he has spoken on those issues emphatically and long after his outbursts in 2013 and 2015 — and blessed with a personality to match his outsized physicality, he is the best thing to happen to professional boxing since Muhammad Ali. And the worst.

“The crazy thing about professional sports stars is that they start living in such a bubble that they almost become their own gods in the sense that nobody can say anything towards them. But they can say what they like and they get away with it,” says sports psychologist Jannie Botha. “Nobody can hit against the bubble, but they can hit from inside outwards as much as they like and as often as they like.”

Surely influential figures like Fury — he has 5.6 million followers on Instagram and 2.1 million on Twitter — need to be more responsible? “We should keep them accountable, because their bubble inflates higher and they live above the rest,” Botha says.

He adds that the same applies to Paralympic athlete Oscar Pistorius, who murdered his girlfriend Reeva Steenkamp in February 2013. “If we think of Oscar Pistorius’ situation, they are so deep in the bubble they think they are going to get away with whatever they do. It’s time the public keeps them accountable, because we don’t really do that and they just keep going.”

Would Botha be up for the challenge of setting Fury straight, and how might he do that? “Any culture in the world, including winning and losing cultures, has the same four principles: greet, eat, time, talk. Once you become the kind of person where everyone is following everything you say, language is really important. How you talk, how you use your time, how you eat and drink, and how you greet people. They’re simple principles, but they make you either someone people want to follow or shy away from.

“When I work with individual sportspeople, the first thing I really work on is their culture. Fury tells us so much about what he believes and thinks, but then he says the complete opposite. If I had to work with him I would first find out what his real culture is, because he contradicts himself. The problem lies in his personal culture. He hasn’t settled his own identity, and then he just blurts out stuff. I would enjoy working with him because his culture is really bad.”

Regine le Roux, the managing director of Reputation Matters, a firm of reputation management specialists, saw the nuance of Fury before and after his medical diagnosis of being bipolar. “He’s been suicidal and he’s had drug and alcohol problems in the past. But that’s also because he is bipolar. A lot of the controversy came up prior to that diagnosis.

“He’s been very open and honest about the journey he’s been on in terms of having an addiction problem. He has taken the bull by the horns and recognised that there is an issue. He has recognised that he needs help. He’s acknowledged his problem, but a big thing is to open up and communicate.

“Since 2015, I haven’t picked up any additional slurs from him. I think that’s because he has realised the impact he has. But I also think he has a huge opportunity or platform to speak about mental health.”

How might Le Roux help someone like Fury rehabilitate and maintain their image? “We look at your values. That’s the golden thread that you communicate. It’s about living up to your values and having a vision for yourself — what is it that you’re heading towards? That’s the crux of all of it. From there it’s how you communicate, who you interact with, who you want to associate yourself with,” she says.

“When we measure a reputation there are 10 different things we take into consideration. But the key thing that crops up across the board is if you don’t have your core values in place, be it respect, authenticity, integrity — whatever is core for you — things are going to fall apart. Because that is what structures your behaviour and actions.”

She has a message for the boxing industry: “Sponsors need to be very mindful of who they back because their brand values could be compromised by the actions of sportspeople. We’ve seen that with so many stars whose sponsorships have been pulled incredibly quickly. That’s always the thin line that you tread when you’re going to be controversial.”

Tyson Luke Fury’s middle name might well have been Controversy. His father John Fury named his son after Mike Tyson, a convicted rapist, albeit almost four years before the latter was jailed for that crime. But it’s doubtful prior knowledge would have made Fury senior change his mind: he himself was put away for nine years for gouging out a man’s eye during a street fight. His defence was that the man had been biting his face.

So far, so boxing. Nothing should surprise us about this sewer of society. For instance, Fury’s announcement of his retirement, effective immediately after his vicious uppercut stopped Dillian Whyte in front of 94 000 spectators at Wembley Stadium in London on 23 April, isn’t worth spit. Four days later, Fury told Piers Morgan’s Uncensored programme: “When is enough enough? I’m happy, I’m healthy, I’ve still got my brains, I can still talk. I’ve got a beautiful wife, I’ve got six kids. I’ve got umpteen belts, I’ve got plenty of money. I’ve got success, fame, glory. What more am I doing it for?”

Was that the last the world will see and hear of Fury? “Not in a million years,” promoter Barry Hearn told the BBC the next day. But, this being boxing, Hearn was working an angle. He promotes Anthony Joshua, the polite, clean-cut heavyweight who is everything Fury is not. When Joshua went down on points to Oleksandr Usyk in London last September, he lost the same collection of world titles that Fury won by beating Klitschko.

Negotiations for a rematch were halted by world events. Usyk is Ukrainian and went home to help fight the war against the Russian invaders. He has since received government permission to return to training for the showdown with Joshua, but a date has yet to be announced.

Joshua is the biggest drawcard in boxing after Fury. Frank Warren, Fury’s promoter, has estimated that a fight between the two could be worth £200 million. “It will be so much money it will be impossible for [Fury] to turn it down,” Hearn said.