Taking a young bull by the horns has proven more difficult than expected at Schofields in Sydney’s north-west.

Passing drivers rustled up a rope after spotting the wayward creature trotting down the road on Monday afternoon, but getting the beefy youngster under control took teamwork from drivers and farmers who chased down the plucky animal.

He was eventually steered onto the median strip and tied to a tree and is now safely back in his paddock.

NSW Police said officers were called at 2.45pm and the bull was returned home safely.

“Police made an arrest of a different kind this afternoon after a cow was on the mooo-ve causing traffic chaos in Schofields,” police posted on Facebook. 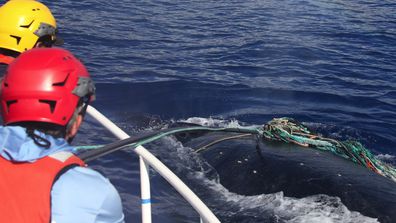 Inside mission to save entangled humpback whale with calf off Hawaii

“Thanks to the quick thinking work of officers from Riverstone Police Area Command, the cow is now home safely — albeit a little thirsty!”