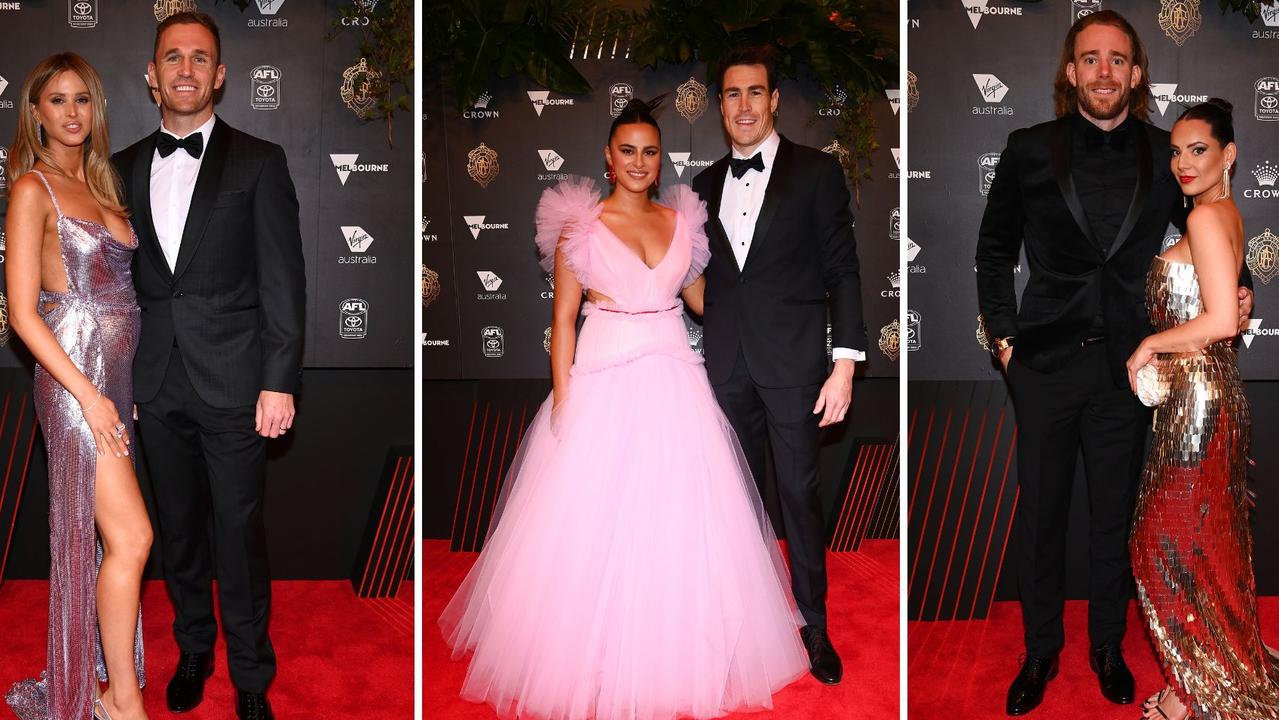 The first group of guests have arrived on the red carpet for the 2022 AFL Brownlow Medal Awards.

It’s the highlight of the AFL calendar each year – but while the prestigious Brownlow Medal is only awarded to one player, it doesn’t stop every attendee from pulling out all the stops.

Players ditch their team colours in favour of slick suits while the wives and girlfriends commandeer attention with their glitzy outfits.

This year, the event is being held in all its glory for the first time since 2019 at Melbourne’s Crown Palladium, and has a strict dress code.

While men are required to wear full “black tie suits”, women have been instructed to wear “evening gowns”.

First to hit the red carpet was Geelong Cats captain Joel Selwood and wife Brit, who last week announced they would soon be expecting their first child.

The two were closely followed by Cats teammate Tom Hawkins and wife Emma, and Jeremy Cameron and partner Indiana Putra.

Top medal contender Carlton’s Patrick Cripps and fiance Monique Fontana have again stolen the show on the red carpet, with Fontana trading out her 2021 long-sleeved baby blue gown for a dark blue train.

The pair were lead down the carpet behind Melbourne Demon’s superstar Christian Petracca and partner Bella Beischer.

Clayton Oliver and partner Isobel Cleary were among the group of top medal contenders next to step foot onto the carpet, alongside Andrew Brayshaw and partner Lizzie Stock and Brownlow favourite Lachie Neale and wife Julie.

In the past, WAGs have pushed their fashion choices to the limit, opting for dresses with very high splits and flesh-flashing cut outs for footy’s night of nights.

One of the most iconic looks to date is arguably Rebecca Judd’s plunging red gown from late Perth designer Ruth Tarydas.

The mum-of-four – then known as Rebecca Twigley before she married retired footy legend Chris Judd – made her debut at the event in a very revealing gown in 2004.

The neckline dipped below her belly button, while the back of the dress was even lower, showing off outline of her buttocks.

Despite its shimmering details, the $7000 dress – originally designed as a wedding gown – was a trendy “naked” number which meant at first glance it looked as if Julie wasn’t wearing much at all.

Her bold gown raised eyebrows, but the “naked” gown trend is still as popular as ever as they show maximum skin while still remaining covered.