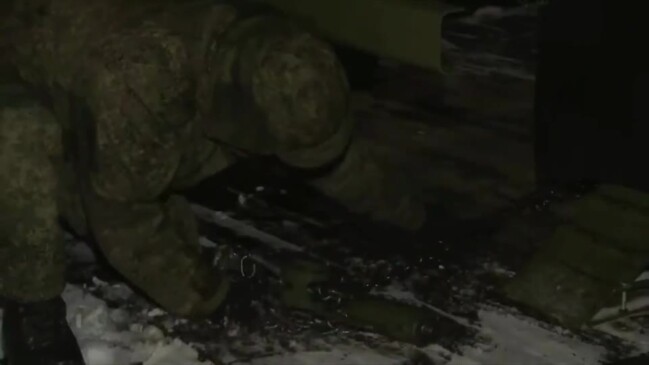 Air defense units armed with anti-aircraft missile systems arrived in Belarus from Russia, both countries announced on Thursday, February 3, the same day that the Russian Minister of Defense met the president of Belarus in Minsk. In a press statement, the Russian Ministry of Defense said the Russian air defense units armed with S-400 Triumph anti-aircraft missile systems will travel to a training camp in the Brest region of Belarus. Russia had announced on February 1 that it had built a field camp in the Brest province in southwest Belarus, close to the Polish border, to carry out exercises aimed at bolstering the defenses of “state and military facilities,” airspace, and borders, and to protect against armed invasion. On February 3, Russian Defense Minister Sergei Shoigu traveled to Minsk for a meeting with Belarusian President Alexander Lukashenko. The men said that Russia and Belarus will hold more than 20 joint exercises in 2022. They also went to the Brestsky training ground, where they will inspect the units of the armed forces of the two countries. The meeting and announcement of the new field camp and arrival of anti-aircraft missile systems to Belarus came as Western powers alleged that Russia was carrying out a large military buildup near Ukraine’s borders in preparation for a possible invasion of Ukraine. Belarus, a close ally of Russia, shares borders with Ukraine to its south, Poland to its west, and Lithuania and Latvia to its north. Credit: Russian Ministry of Defense via Storyful