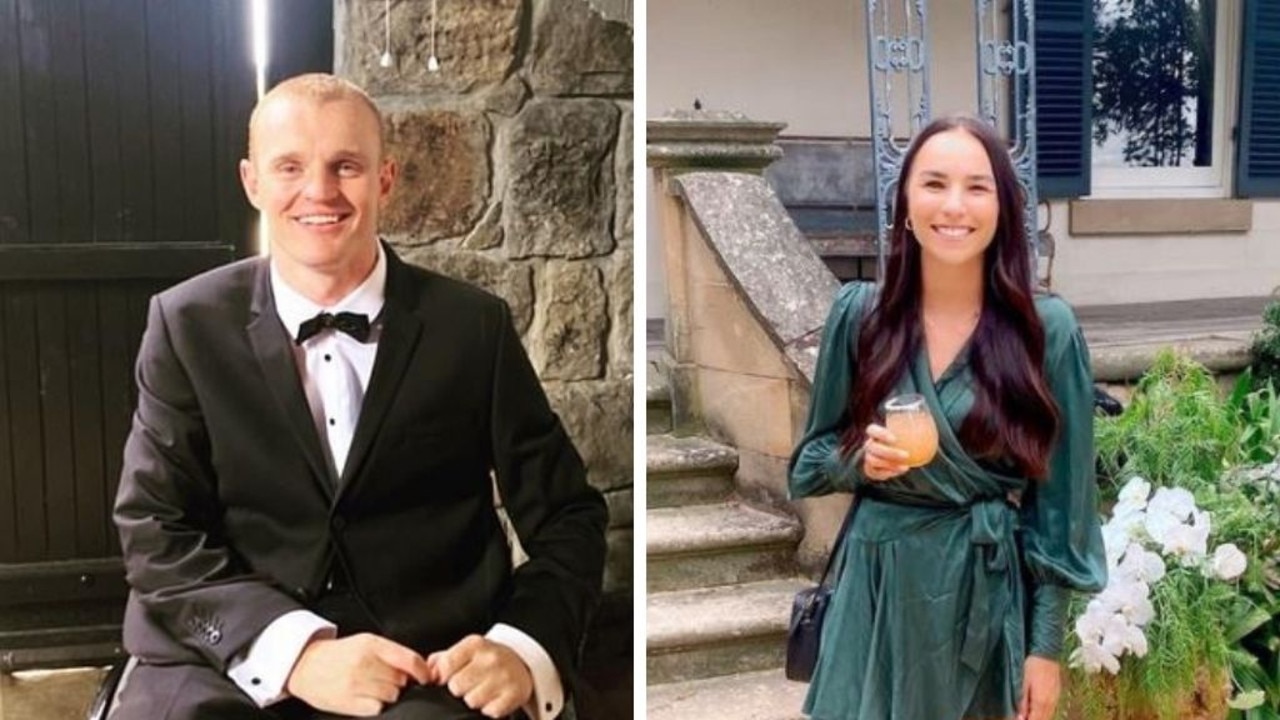 The ending of former NRL star Alex McKinnon’s relationship with Teigan Power was a shock to most — but there were subtle hints.

Alex McKinnon and Teigan Power confirmed their shock split on Sunday night – but eagle-eyed social media followers may have spotted a change even earlier.

The couple’s split was announced on Sunday, however its understood they parted ways in January. Stresses involved with raising a young family were reportedly the primary cause of the separation.

Instagram pictures reveal the couple had left subtle hints not all was rosy in their relationship prior to the news leaking over the weekend though.

McKinnon and Ms Power attended the same wedding in March, however didn’t share any photos together to social media.

The couple warmed hearts across the country when they became engaged in 2014, two weeks after the former rugby league player woke from a coma following a devastating spinal cord injury.

And the childhood sweethearts captured Australia once again when they were married in 2017, with McKinnon surprising his wife and guests by standing up from his wheelchair.

“It took 3 years of EVERYTHING I’ve got in me to achieve this moment of standing with my beautiful wife on our wedding day. ️Dreams do come true,” McKinnon, now 30, said after their special day.

The former Newcastle Knights player has routinely praised Ms Power for supporting him through his rehabilitation, and credited her for allowing him “to find myself again” in his book, Unbroken.

“I lost myself. I lost my identity to rugby league because that’s who I was,” he wrote.

“But the beauty is that Teigan’s been with me through the whole thing and allowed me to find myself again. She’s allowed me to sit in some dark spots.”

They had been together for 12 years after meeting at a party in 2010.

“Teigan in my eyes you are a superhuman, your beauty, your values – your thoughtful and caring nature is honestly second to none,” he told her.

Ms Power promised him she would continue to love him “unconditionally”.

“I vow to help steer you through uncertain times and push you towards your dreams. I promise to laugh with you, dream with you and celebrate what life brings us,” she said.

After the wedding, she gushed over her new husband in an interview with New Idea, revealing she had no idea he had been planning to stand up.

“I was pretty shocked to tell you the truth. I couldn’t believe Alex stood for all that time,” she said.

“It was lovely to be able to look him in the eye, rather than looking down at him in his wheelchair.

“It just made the ceremony that much more intimate. We started crying every time we caught each other’s eye. It was beautiful.”

McKinnon said being able to stand in wedding photos, and fulfil the promise he made to his bride from his hospital bed, was “unbelievable” to reflect on.

“If we had to do that again I don’t know if I could do it, it was just everything just aligned on that day and it was perfect,” he said after their big day.

“Even after the ceremony myself and Teigan stood together in front of everybody there and got photos and it still blows my mind.

“I had my hands locked in when I stood and I just kept crying and crying and I couldn’t even see when she turned up, I was in tears so much.”

McKinnon since revealed how immediately after the accident, which unfolded during a match against the Melbourne Storm in March 2014, he feared their relationship would eventually break down.

McKinnon in his book said Ms Power had “been life-changing for me”, and had always been certain she would stick by him in the aftermath of his injury.

“I knew it wouldn’t break her. I thought it would break me,” he wrote.

The couple welcomed their first child, Harriet Anne, in October 2018, and twin girls, Audrey Jill and Violet John, in April 2021.

They have, for many, been a glowing example of the strength of true love, with the pair regularly being referenced as “inspirational”.

Ms Power often updated her Instagram accounts with photos of McKinnon as he transitioned through different stages of his rehabilitation.

Sharing photos of her partner walking mostly unassisted in 2016, she wrote: “So proud of all the hard work Alex McKinnon puts into his rehab! We are back at Making Strides and he is smashing out the walking again.”

“So grateful to have such a determined man by my side.”

The couple have both since made public statements after their separation was made public by a third party, asking for their privacy to be respected as they “concentrate on our family and children”.

They celebrated their twins’ first birthday as a family unit on Sunday, with the former couple posing for multiple sweet Instagram photos with their daughters.

The pair appeared to be enjoying the celebration, which took place at a park and featured two tall pink cakes with the twins’ names on them.

McKinnon recently left his job as a recruitment officer at the Newcastle Knights and is now studying psychology at Newcastle University and working for Fox Sports as a sideline reporter and analyst.