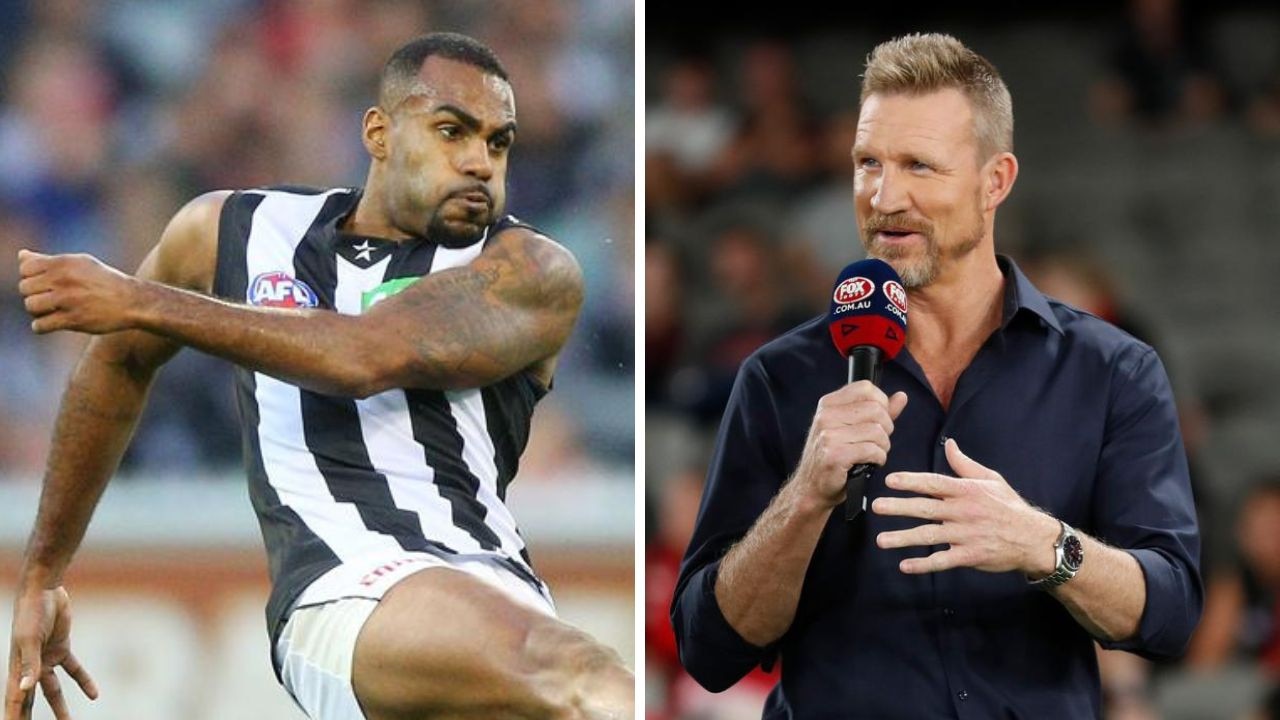 Shock allegations about a pornographic image involving “five or more men” being shown to star AFL players has prompted action.

Collingwood will reportedly investigate the specific allegation of a pornographic image being shown to a group of players.

The allegation of an assistant coach using an image that showed five or more men ejaculating on a woman’s face to emphasise a point during a team meeting is one of several explosive claims made by ex-Collingwood star Heritier Lumumba in a leaked dossier.

As first reported by The Herald Sun, the document includes several new allegations against senior figures at the Magpies.

The 2014 incident is now reported to be the focus of a fresh investigation spearheaded by Magpies chief executive Mark Anderson.

Veteran football journalist Caroline Wilson said the club will investigate the incident separately from all the other allegations that have been made by Lumumba.

Lumumba has spoken out repeatedly over an alleged racist culture he says existed at Collingwood during his time with the AFL giant. He says there was a culture of “racist jokes” and alleges he was referred to as “Chimp” by teammates.

He originally planned to present his dossier to Collingwood as part of the reconciliation process following the Do Better racism report, which eventually led to Eddie McGuire’s resignation as Magpies president.

But that hasn’t happened after Lumumba, Leon Davis and Andrew Krakouer formally severed ties completely with the club last month over its handling of allegations of racism.

Lumumba in October, 2020, launched legal action against the football club and the AFL over allegations the organisations failed in their duty of care. His lodgement with the Supreme Court has since expired and is now considered dormant.

The latest accusations contained in the leaked document have now prompted to Collingwood to act.

Speaking on Channel 9’s Footy Classified, Wilson said nobody at the club has yet denied Lumumba’s claim about the 2014 incident surrounding the use of a pornographic image.

“I can’t find anyone at Collingwood today, who was there at the time, who is saying to me that this did not happen. No one is confirming that it did happen, but all the people I’ve spoken to just said they had no recollection of it,” Wilson said.

“Just horrified to think that this is going on in the last decade, absolutely horrifying to me.

“Mark Anderson confirmed to me tonight that he’s investigating that specific claim. Although no one involved is at the club anymore, they believe they need to get to the bottom of this,” she said.

“There is a fear and a suspicion that it may be true. Who would make that stuff up? How much would Lumumba hate the club that he would make that up? It doesn’t feel made up to me.”

The AFL is yet to publicly respond to Lumumba’s latest claims.

Lumumba said in the document: “An assistant coach showed a pornographic image during a team meeting to emphasise a point that he was making.

“One of the team rules was to ‘come forward’, so he showed an image of a group of about five or more men ejaculating on a woman’s face with the words ‘come forward’ as a caption.

“Nathan Buckley was the head coach and seemed unfazed by it all.”

Lumumba also claimed former CEO Gary Pert made sexually inappropriate comments in front of players’ wives and partners during a night out in 2011.

He demanded an apology and Pert was forced to apologise to the players but Lumumba said he felt targeted afterwards.

The document also revealed the extent of his ongoing dispute with former Collingwood coach Nathan Buckley.

The 2010 premiership player said in his final year at the Magpies: “Buckley became increasingly paranoid about me.

“In team meetings I would constantly catch him staring at me, and even when he was speaking in front of the group he would consistently glance down at me.

“It became too much for me, so I confronted him about it privately. He claimed that he felt I was judging him for his intelligence, and that I was demanding too much from the club.

“When it came to the culture of the club he became hyper defensive about being held to the standards and values he was supposed to be leading.”

Buckley responded to Lumumba’s claims on radio on Monday morning.

“But there are other versions of the truth that are a long way away from the way that he perceives it.

“Mine is very different from what he presents, but the context becomes important and the whole idea of the process is to have open dialogue, respectful dialogue so that you can actually move forward in a positive way.

“It seems that Heritier doesn’t really want to move forward unless, I don’t know, heads need to roll. I don’t know exactly what he’s looking for or what his requirements are to feel like he has been heard.

“I consciously thought of this – I put my head on the pillow last night and I slept well because I know that I have owned my imperfections and I’ve owned the things that I’m responsible for.

“My conscience is clear in that regard – it doesn’t mean I’ve been perfect, it doesn’t mean I couldn’t have done things better – but I’m open-minded to continue to learn and I think the club is as well.”

Buckley was asked specifically about Lumumba’s allegations of a pornographic image being used in a team meeting.

“What I’d say here (is) I’m not going to go to detail of what is in there (the dossier),” Buckley said.

“There’s a lot that’s not right in there. One thing I know is if you start denying one and then talking about another then it creates a highlight of an issue that I reckon across the board that is not the truth that I know to be true.”